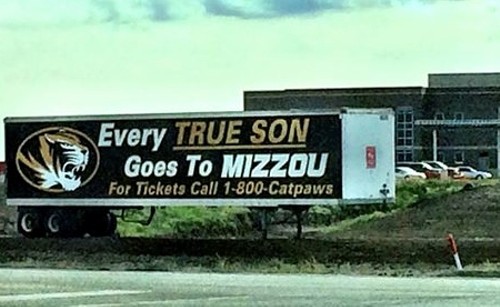 Courtesy of Rep. Stacey Newman
So where does every true daughter go?

The University of Missouri athletic department's new marketing strategy seems to be alienating current Tigers more than it is recruiting new ones.

The school parked a trailer with the message "Every true son goes to Mizzou" on campus, drawing calls and letters of frustration from Columbia residents, Mizzou alumni, parents and even state Representative Stacey Newman, all of whom say the billboard is unnecessarily sexist, especially for an athletics program that includes female student-athletes.

"There's a better message," Newman tells Daily RFT. Newman's daughter is a senior at Mizzou, and her husband is a double alum. "This one just stuck out like a sore thumb. For any college to put that up, you have to say, 'What are you thinking? Who are you trying to market to?' I think that message goes much further than they intended."

The phrase "every true son" comes from the Mizzou fight song: "Every true son, so happy hearted/Skies above us are blue." The school eventually updated the title of the song to include the word "daughter," but you'd never know it listening to students sing along with the marching band on game day.

Newman says just because the words are in the fight song doesn't mean they have to be on an official Mizzou sports advertisement.

"There are a lot of songs out of our past that I don't think many of us would want to put on a sign," Newman says.

But for Newman, the problem is about more than a fight song or even a sign. The real problem is how lingering, supposedly unintentional sexism supports a culture of violence against women, an issue made very real to her and the rest of America when 22-year-old Elliot Rodger said his hatred of women motivated him to kill six people near the University of California in Santa Barbara.

"What struck me immediately is the level of sexism that we are all newly aware of, especially after the shooting in Santa Barbara," Newman says. "Many of us are more sensitive to messages, to what's offensive. We're down to the point now where women are in danger. They're losing their lives."

Newman sent a complaint to the school explaining that the sign "sends a message that women are not part of Mizzou's heritage." Mizzou responded to Newman and others who registered complaints saying the school didn't intend to offend anyone by using the fight song lyrics on the sign, Newman says. (The university did not immediately respond to Daily RFT's request for comment.)

Newman says she wants more than an apology. She wants the trailer gone.

"It's so easy to remove this," Newman says. "It's not cool. It's not acceptable."