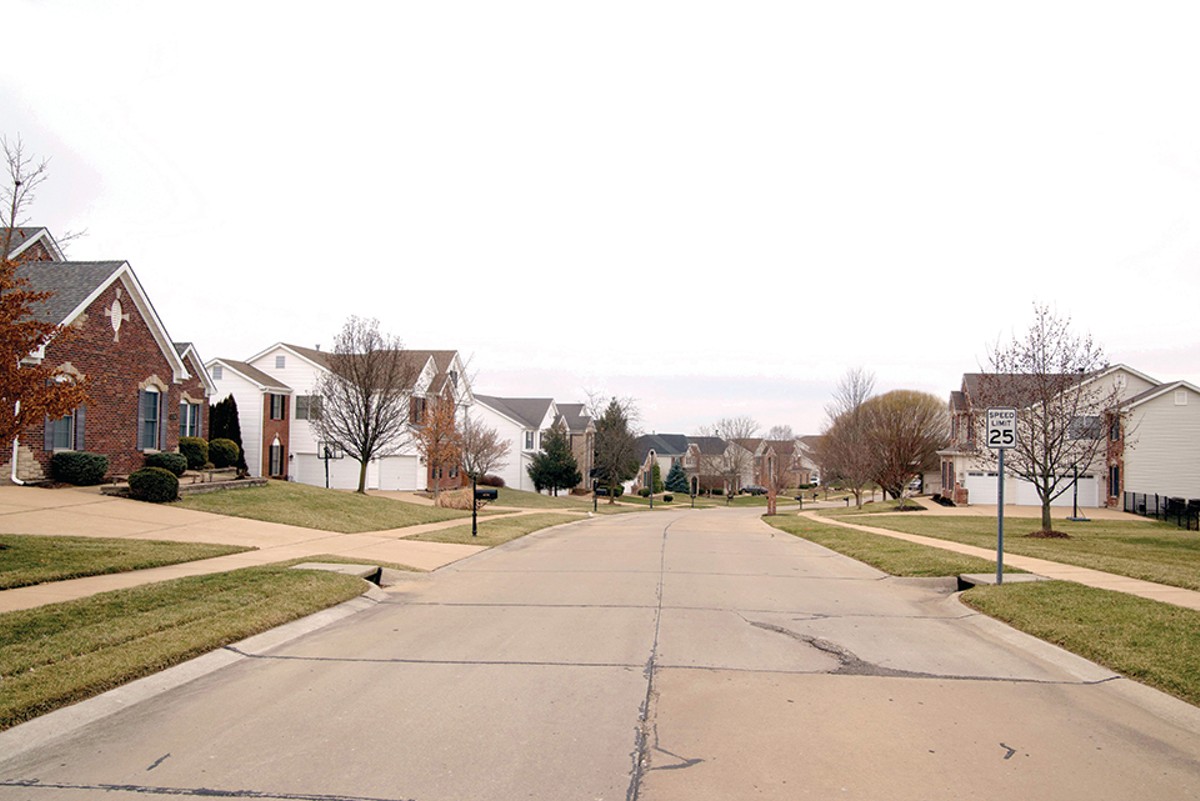 Land that is now a housing division netted the former owners millions — and taxpayers a pittance — thanks to loopholes in Missouri tax law for fake farms. TREMTON ALMGREN-DAVIS

Back in the 1960s and '70s, states passed measures to lower land taxes for farmers. Somehow that new agricultural tax swiftly turned into a rebate for landowners who had never once dirtied their hands tilling or sowing or milking. Old-money families, newly rich celebs and shrewd investors across the country took advantage of the agricultural classification. Donald Trump claimed it by letting eight goats graze Trump National Golf Course. Jon Bon Jovi managed the trick for his New Jersey estate by raising honeybees.

Here in St. Louis County, Tony Grasso suspects it was his dad who helped spread word of the loophole.

"I think my high school dropout dad and the south-county politicians of his era ginned up a couple pieces of property that were large and in the path of progress, making sure they were classified as agricultural so we could afford to keep them," Grasso says. "In the '60s, my father bought 80 acres for $200,000 in Sunset Hills. We sold it for almost $10 million, and that year the real estate tax was less than $400." The real estate tax rate for agricultural land is 12 percent of the assessed value — a far better deal than the residential rate of 19 percent or the commercial rate of 32 percent.

"Then my dad passed the word to Mr. [Gussie] Busch, who got his hair cut at the barbershop at Grasso Plaza," Grasso continues. He grins. "Never underestimate the high school dropouts. As Grandpa Grasso the immigrant from Sicily said, 'If you have the land, the king will come to you.'"

Grasso says he didn't think much about the tax differential at first, but later — after he earned his law degree and a master's in tax law and bought some real estate himself — he remembered his dad's political donations and barbershop schmoozing, and the implications sank in. Money needed by schools, police and fire departments was "buried in misclassified 'agricultural' properties," Grasso realized. "So I ratted myself out. I was a fake farmer. Four acres off Telegraph in Oakville, part of it taxed as a farm."

Once Grasso had his own fake farm reclassified, he started noticing other instances: vacant land at busy intersections; land held by banks or bought by developers but still classified as agricultural. One day, he raised the subject with a friend in Ladue, who he says recalled chatting with his neighbors' hired hand: "He said they were getting ready to bring in the cows. A government official had been out to examine the farm, and they had to get some cows, so they rented a herd, and they'd walk 'em in front of Ladue Road. You can't make this stuff up."

When I ask St. Louis County Assessor Jake Zimmerman if he's known of anyone to rent cows, he chuckles. "There's an apocryphal story about some lawyer who owned one horse and brought it to all the different pieces of land he owned and took a picture. But I don't lose a lot of sleep over residential property on the edges of west county where there is wooded land from a historic farm, or up on the bluffs by Spanish Lake, where you have some old-growth forest. If it really is undeveloped land, and it maintains its historic character, that's fine. Besides, it's small potatoes, and I think you will find in almost every case that we have successfully classified the actual house and the three or so acres around it as residential.

"What really chaps my hide," he continues, "is the commercial property owners. If you drive through less-developed parts of west county, let's say around the Chesterfield Valley, you will frequently see big tracts of open land owned by prominent real estate investors. They've already hooked the land up to MSD and laid in the plumbing, and it's listed for commercial sale, but you might see winter wheat or corn growing. The investor is land-banking the property. A farmer shows up and hays the field at the end of the year."

Zimmerman has challenged these cases, because in his opinion, "you value property on its highest and best use. They don't want you to buy it as a $1 million farm; they want you to buy it as a commercial property for a lot more money than that." Time and again, he loses the fight, he says, "because Missouri law is vague on the subject. The Missouri Tax Commission has ruled that the actual use of farming the land is enough."

One case the assessor's office tried to fight — but had to settle — was a 13.5-acre tract in Earth City owned by RP Landco, a limited liability corporation. Its Columbia, Missouri, address, St. Louis football fans might be interested to know, matches the address of The Kroenke Group.

In 2017, the property was zoned for commercial development and listed for sale for close to $2.8 million; it was touted as a "prime location" and proposed as suitable for "commercial, industrial [and/or] industrial park." Zimmerman's office listed it as commercial, with an appraised value of $2.4 million.

The owner appealed that classification, insisting that the property was agricultural and that it was worth $14,200. The evidence? An agreement with a farmer to plant winter wheat — and keep the proceeds, if any, from the sale of the crop.

Another case was a 12-acre tract in a commercial section of Florissant, almost half of which was being used as a car dealership. The owner hired someone to plant winter wheat on the remaining 6.5 acres. 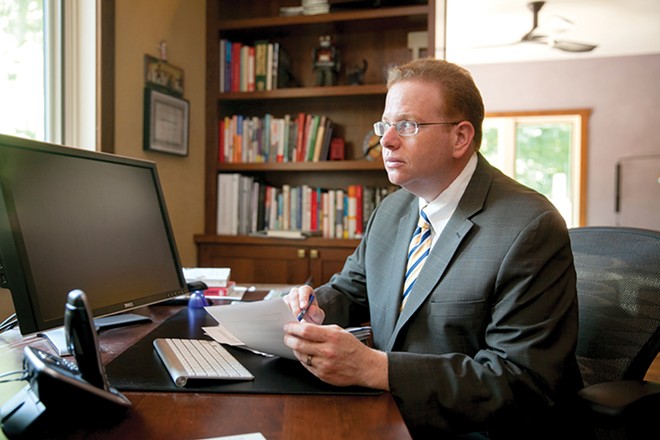 Zimmerman first realized faux farms were a problem in 2012, when staff members told him agricultural property was increasing in St. Louis County. "I said, 'That's nuts. That can't be right.' I was new to the assessor's office. I started asking around, and people on my staff said, 'They don't want us to do anything about it. It's not pro-business to challenge it.'"

"Who is 'they'?" Zimmerman asked. His staffers shrugged. Until county assessor became an elected position — with Zimmerman the first to be elected into the role — there were quite a few layers of bureaucracy between that office and the county executive.

Right out of the gate, Zimmerman tackled some extreme examples, like the auto auction lot that "had open dirt with cars parked on it" and "the P.F. Chang's where they were trying to claim they were farming the median. There were at least ten cases like that." A little public shaming might have been a deterrent, but it was not a long-term solution, he adds: "The ongoing problem is that Missouri law makes it too easy."

There are several ways to stitch the loophole closed, other states have found. You can require some measure of productivity to prove it's a working farm. (Several states require proof of income.) You can say the land must be a certain number of acres (in Montana, it's 160; in Vermont, 25) and not just a chunk of a suburban residence's lush backyard. You can even do what New York does: say that if land that is classified as agricultural gets converted within five years to some other use, the taxing entity can go back and capture the difference.

New York's approach is Zimmerman's favorite, because such "clawbacks" tackle commercial redevelopment. He's happy to accept a Huntleigh estate with a stable of polo ponies as agricultural. "If you have a real barn with real livestock, that's pretty legitimate," he says. "The space taken up by the horses is obviously not space the family is sleeping in or running a firm out of."

Texas is tougher: "Land won't qualify simply because it is rural or has some connection with agriculture," notes a Texas appraiser's manual. "Land used to train, show, or race horses, to ride for recreation, or to keep or use horses in some other manner that is not strictly incidental to raising horses does not qualify as an agricultural use." And in New York, you'd have to be running a commercial horse-boarding or equine operation with ten or more horses and revenue of at least $10,000 a year to qualify.

"To my mind," Zimmerman says, "there's so much obvious bad behavior. Let's pick the low-hanging fruit before we go into the gray areas."

He isn't going to win much support from the landed gentry or the commercial real estate developers, but wouldn't Missouri's powerful agriculture lobby back his efforts? "In my opinion, real farmers should be on the side of justice here," he says, "but my experience has been that legislative leaders in Jefferson City are scared to touch the definition of farming for fear of offending the Missouri Farm Bureau." He sighs. "This shouldn't be a partisan issue."