Last night officials with the CityArchRiver 2015 Foundation, the folks behind the massive redevelopment project around the Gateway Arch, unveiled new details of their project -- which they say is on track for completion by October 2015.

"This is the front door to St. Louis," Ryan McClure, communications director for the foundation, tells Daily RFT. "It represents our city and everything it is and can be.... People are going to have an entirely new experience that we as St. Louisans will really be proud of."

Newly released renderings and more details on the development below.

Of note, officials announced in a public presentation last night, that the project has targeted October 28, 2015, as the completion date, which is the 50th anniversary of the Arch's construction. Walter Metcalfe, foundation chairman, reported that over half of the components of the projects are fully funded and construction will begin this year.

The effort -- coordinated in partnership with the Great Rivers Greenway, the Missouri Department of Transportation and the National Park Service -- got a boost earlier this month when voters in the city and county voted in favor of Proposition P, a sales tax that will help fund the project and other park and trail efforts in the city and county.

"Everyone is moving toward this common goal and it's a really beautiful thing to watch unfold," McClure says. "This is a transformational project."

Last night, the presenters also offered new details on the planning and design for exhibits at the Museum of Westward Expansion under the Arch.

"We are going to be able to tell the story of westward expansion and the story of St. Louis in this new interactive, engaging way," he says.

Here are some new photos of the museum design, followed by updated riverfront graphics. All photos courtesy of CityArchRiver 2015. 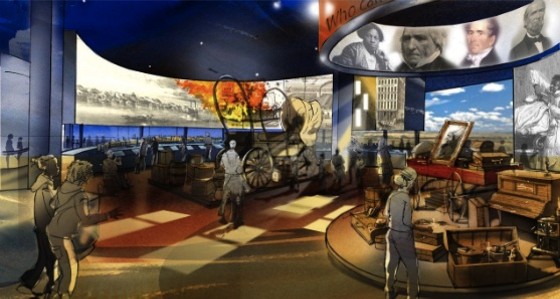