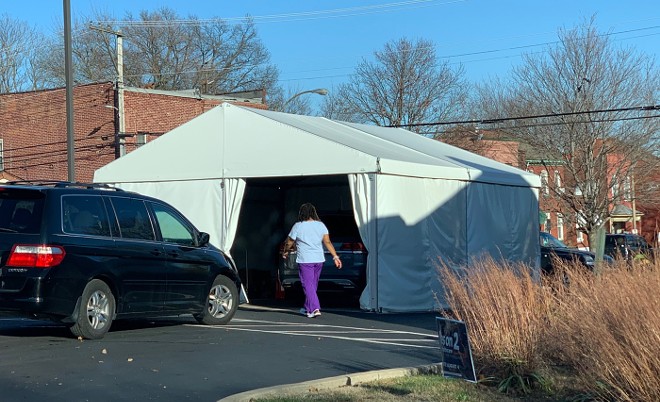 
Gov. Mike Parson warned this morning that COVID-19 is creating dangerous concerns throughout Missouri but refused to take the main step that health experts say would make the greatest difference.

In a news conference to announce the extension of an emergency declaration, Parson said he will not issue a statewide mask mandate.

"For people that say it's government's responsibility, it's not," Parson said.

Parson advised Missourians to make smart decisions heading into the holidays, including wearing masks and altering Thanksgiving plans to avoid spreading the virus. Since the beginning of the pandemic, the governor has repeated that it is up to individuals and municipalities to make their own decisions when it comes to the pandemic. Nothing in the recent surge has changed his mind, he said.

That's a flat rejection of the advice from medical professionals. In one of the latest pleas, the Missouri Hospital Association wrote a letter to the governor, warning that it is not enough to simply ask people to wear masks.

"The wolf is at the door," the association's letter, sent on Friday, said. "Missouri's hospitals urge you to issue a statewide masking mandate. A mask mandate may be unappealing to some, but it has become necessary. We urge your immediate action on this issue."

That echoed a call from the St. Louis Metropolitan Pandemic Task Force, whose incident commander Dr. Alex Garza warned that hospital intensive care units would be overrun by early December if nothing changed. Garza was a co-author on a recently released study that found masking mandates made a big difference in St. Louis and St. Louis County, creating a stark difference between them and the transmission rates in surrounding counties, including St. Charles and Jefferson.

Parson spoke repeatedly about the looming shortage in nurses and doctors to man hospital beds as serious COVID-19 cases surge across the state. Rather than implementing a masking mandate to reduce the number of patients expected in coming weeks, he said the state is trying to figure out ways to increase staffing, such as involving the Missouri National Guard, recruiting health-care workers from other states and putting into action nurses who are still in training.

"It's about the manpower, the womanpower to have the people on the ground to fight the virus," Parson said.

Health experts have said that's a losing battle, and it would be smarter to take steps to stop as many people as possible from getting sick, rather than trying to triage the situation on the back end.

"I hate to sound grim and doom and gloom," Dr. Garza told the Riverfront Times earlier this week, "but I do think it's important for people to understand health care is a finite resource. We just can't manufacture nurses and doctors and technicians overnight."

Missouri is now one of fourteen states without a masking mandate. Holdouts North Dakota and Iowa issued mandates this week. White House pandemic assessments place nearly the entire state of Missouri in a "red zone" of virus spread.

Parson said he's heard the calls from various medical associations, but they don't have the responsibilities of government, describing it as "a lot of media."

"If they look at it from a medical view, they have a different perspective than I do as governor of the state of Missouri," he said.

Parson said the state is preparing for coronavirus vaccines, the first of which could be out in limited quantities in December. That would go first to health-care workers and those most vulnerable to the virus. Asked about the possibility that some people will refuse to take the vaccine, Parson said the state won't mandate it, but will hope to convince skeptics with the results of others taking it.

Much of the fight against the virus comes down to "personal responsibility," Parson said.

"The battle is still here," he said. "This is not going away, so it's going to take all of us to do our part."