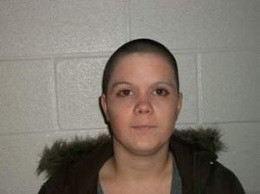 The 22-year-old student in Truman State University's graduate education program first told her professors back in June that she had cancer, according to records filed this week in Adair County Circuit Court.

People offered her gift cards, bought her meals, and even gave her a wig to wear when they saw her shaved head, said campus security chief Tom Johnson in a phone interview with Daily RFT on Thursday.

Image via
Violette Hall, home of Truman's education department
But last week, when finally confronted by authorities, Marut admitted she didn't have cancer and wasn't undergoing treatment -- and that she'd whipped up a bogus note on hospital letterhead and forged a doctor's signature to make it look like she did.

For that letter, she now faces one felony count of forgery. The charge was filed on Wednesday.

But why'd she do it?

"She was missing class and not doing part of her internship," said Johnson, the lead investigator in the case. "The excuse she was using was that she had cancer."

According to the probable cause statement, Marut was doing an internship at the Kirksville Primary School for the fall semester.

By November 5, the principal there felt suspicious enough about "some inconsistencies" in Marut's story to call the young woman's professor. The professor asked the student to get a doctor's note describing how much work she could realistically be expected to do, given her condition.

Image via
That night, Marut produced a letter, ostensibly from a doctor, stating that she had cancer and was undergoing treatment. The next day, the professor showed it to other administrators in the Master's of Education program who thought it looked legit.

But, at the urging of the primary school's principal, they decided to check with the doctor whose signature appeared on the letter.

The next day, on November 7, Dr. Michael Trendle of the Boone Hospital Center in Columbia sent a letter to Truman stating that he could "unequivocally confirm" that he'd never signed any such letter, and that Marut had never been a patient at Missouri Cancer Associate, the George Rea Cancer Center or Boone.

On November 8, campus security chief Johnson and an associate met with Marut, who reportedly admitted that she'd fabricated the letter "in order to continue in her internship."

Wrote Johnson in the PC statement: "She told me she did not have cancer nor was she in treatment."

Marut was arraigned Thursday, according to online court records.

Johnson said he can't talk about the ongoing part of the investigation.

"We're still peeling back the layers," he says.