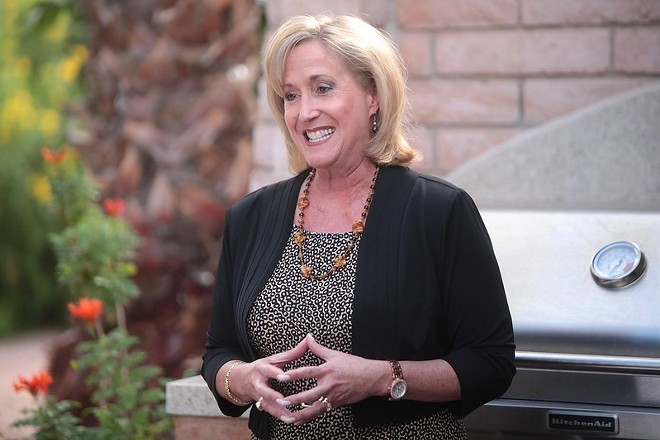 Wagner’s Second Congressional District has long been regarded as safely Republican, with good reason: Democrats have held the seat for only one two-year term in the past 36 years. Republican gerrymandering last year made it redder.

This time around has been looking even bleaker for the Democrats. The midterm elections almost always favor the party out of power nationally, which of course means the Republicans.

JOE DIETRICH
State Rep. Trish Gunby is going up against Ann Wagner for the Second Congressional District.
So, other than wishful thinking, what could possibly put in play the safe Republican district Wagner has held comfortably for 10 years since the late Representative Todd Akin passed the baton to her? Two factors:
The first part needs no introduction by now, even if it just happened last week. The voters of Kansas sent shock waves through American politics with a historic landslide rejection of a constitutional amendment that would have allowed its state legislature to ban abortion.

By an unbelievable 59-to-41 percent margin, the pro-choice side secured the guarantee of a right to an abortion by retaining it in the state’s constitution. That victory margin — predicted by no one — sounded a wake-up call heard on both sides of the bitter abortion debate in states near and far.

The nearest is Missouri, Kansas’ neighbor to the east. The two states are as close politically as they are geographically: In the 2020 election, Missouri was the 16th top state for Donald Trump, giving him 56.8 percent of the vote; Kansas was the 17th best for Trump, with 56.2 percent voting in his favor.

It's too early to know for certain, but the stunning abortion-rights victory in Kansas — fueled by an exceptionally large turnout from women — signals the possibility that the landmark U.S. Supreme Court Dobbs decision overturning Roe v. Wade has awakened a sleeping giant. No one on either side is thinking “nothing to see here.”

Worse for Wagner, everyone agrees that if the backlash against the Dobbs decision will be felt anywhere, it will be in suburban districts of large metropolitan areas like St. Louis. Suburban women were a key to Biden’s landslide 2020 win over Trump.

In Wagner’s second district, the 2020 presidential outcome was virtually a dead heat, with Trump winning by a minuscule .02 percent over Biden. It is true that the Republicans bulked up the district for Wagner with the addition of Franklin County and environs, but not by enough to change its makeup dramatically.

Still worse for Wagner, opposition to abortion has loomed as the central issue of her entire career, but it’s not why she was elected. In fact, there’s no evidence that opposition to reproductive freedom has ever helped her in suburbia, where that sort of thing isn’t popular.

It’s more likely that Wagner has succeeded despite her holier-than-thou, strident opposition to abortion, rather than because of it. Had the issue been center stage, as it is now, it might have been a liability.

Gunby is precisely the sort of woman candidate Wagner doesn’t want to face on the subject. Though pro-choice, Gunby is a moderate offering neither the appearance, demeanor nor voting record for Wagner to attack as a woke radical extremist.

Unlike some of Wagner’s previous opponents, who failed to engage her regarding abortion, Gunby said last week that reproductive freedom will be front and center in her campaign. Special emphasis will go to the subject of contraception, on which Wagner dangerously occupies the low moral ground.

Gunby, a Ballwin resident like Wagner, won a special election in 2019 — and reelection in 2020 — in a tough 50/50 House district. She’s an adherent to old-school, door-knocking retail politics. That strength is Wagner’s weakness.

It can be expected that, as is her custom, Wagner will duck any form of debate with Gunby, or even a town hall appearance. Throughout her 10-year career in Congress, Wagner’s public interaction with the voters in her district has been carefully limited to photo ops and press releases.

Maybe Wagner will get away with that again. But the passion regarding abortion rights unleashed in Kansas suggests that the strategy might not work out so well this time.

And then there’s Wagner’s dubious electoral skill as a politician, a factor that has largely escaped scrutiny. Wagner has benefitted from the Republican tilt of her district and will continue to do so, but there are plenty of signs that she’s much more beatable than most observers assume.

One of those signs was displayed in the most recent Republican primary. Wagner won on August 2 against obscure opponents with just 67.1 percent of the vote, a terrible number for a five-term incumbent.

By contrast, Wagner was unopposed in the GOP primaries in 2014 and 2020 and received 89.9 and 82.1 percent, respectively, in her other two reelection years.

To that point, Wagner’s vote totals in the general election have decreased far below the level that would be expected in a solidly red district. In the past two cycles, she garnered only 51.2 and 51.9 percent of the votes. By contrast, Akin averaged 64.8 percent of the vote in his five reelection efforts, never receiving less than 61.3 percent.

Wagner defeated state Senator Jill Schupp in 2020 by 6.4 percent. But the average winning margin nationally was 28.8 percent for all 435 seats in Congress. She earned a grade of “U” for underwhelming.

The likely reason for this should be discomforting to Wagner: She might not have demonstrated sufficient fealty to Trump to satisfy the MAGA base.

Wagner was notable early in 2017 for executing one of most shameless flips of any Republican in Congress on Trump. Just a month before the 2016 election, Wagner was one of only a handful of sitting House Republicans to demand Trump resign as unfit for office after those epic Access Hollywood videos surfaced. Then he was elected. Then they became pals.

Now, Wagner’s overlooked political weakness is aggravated by the very abortion issue she has made her calling card — without being inconvenienced very often to elaborate on those views, which have veered extremist.

In 2015, she answered “absolutely” to a question posed by conservative CNSNews as to whether “human beings conceived in rape have a right to life.” Wagner said, “I believe in exceptions for the life of the mother.”

She was talking about the Pain Capable Unborn Child Protection Act, which banned abortions nationally after 20 weeks and required doctors performing abortions for rape and incest victims to do so in a manner that gave the fetus the best possibility of survival. Wagner added that she liked the bill because "this bill actually requires a baby to be delivered."

Trish Gunby is a still a long-shot candidate to defeat Wagner, and it will be a challenge to corner her on specifics today. Wagner is already playing down her extremism, but her flank politically won’t be happy with any talk of exceptions.

This year, Wagner isn’t just overrated, she’s standing precariously on the wrong side of history.

And she might be in big trouble if voters decide to click their heels three times and go back to Kansas.