Heroin Getting Out of Control in Metro East, Says U.S. Attorney 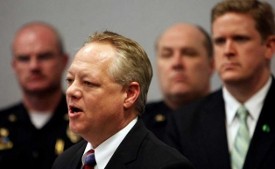 The United States Attorney for the Southern District of Illinois has declared a war on heroin.

The drug, once limited in the number of victims it reached, has hit the St. Louis region like a tidal wave in the last three years, leaving both low-income and affluent communities in its wake.

Now, U.S. Attorney Stephen R. Wigginton says the time has come to step the assault on the epidemic. He wants to treat heroin overdose as a homicide -- and go after the dealer in each case. The minimum punishment for that crime is twenty years in prison.

In Madison County, there have been 30 heroin-related deaths (with five more deaths pending) in the past three years, spiking from just five in 2008, according to the A.P. report. Together, Madison and neighboring St. Clair counties have witnessed 35 heroin overdose deaths since January 2010.

The resurgence of the drug "is coming as hard as crack ever did," said Granite City Police Officer Jeff Donahey in a KTVI report. (See clip below.)

Next Wednesday and Thursday, the Madison County Administration Building will host the "Pharmaceutical Overdose Death Investigation Seminar," which will include talks by Wigginton, Madison County Coroner Stephen P. Nonn and Collinsville Police Chief Scott Williams, as well as Drug Enforcement Agency investigators and physicians from around the nation. For more information, contact Wigginton's office at 618-628-3700.

And tonight at 6:30 p.m., the St. Charles First Assembly of God Church, in St. Peters, is hosting a panel titled "Battling Heroin in Our Community." The event will include talks by addiction experts, law enforcement officers and corrections representatives, as well as a recovering addict.