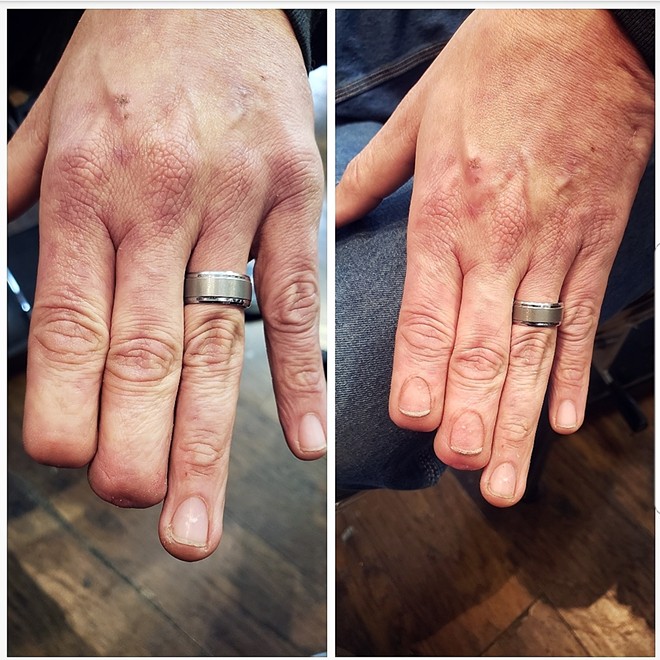 Eleven minutes later, Catalano finished his work. There, on the smooth skin that caps the surgically shortened ring and middle fingers of Bertram's left hand, were two brand-new fingernails.

Bertram had lost both fingers to the first knuckle after the digits were caught in an air conditioner's belt fan last year. But the tattoos made it look like his nubs were full fingers.

"Oh," he told Catalano, looking at the speedy ink work. "Those are really nice."

The the internet agreed. Images of the tattoos posted to Facebook, Reddit and Imgur went instantly viral this week, racking up hundreds of thousands of views and numerous of comments praising the double-take worthy realism of Catalano's work.

It's the little things, Bertram says, that make the tattoo so remarkable. Using Bertram's other fingers as examples, Catalano had inked the imperfections, the calcium spots, the roughness of the cuticles, even the dirt beneath them. The result was so real, it was almost eerie.

"What I was looking for was exactly what he did," Bertram says. "I knew the only person who could do it was him."

Catalano had never inked a fingernail tattoo before Tuesday, but his anatomical artistry had given him a unique reputation as a tattoo artist and body piercer. In 2010, his shop, Eternal Ink, offered free pink ribbon tattoos in honor of Breast Cancer Awareness Month. Over the years, Catalano began offering his services to cancer survivors, tattooing hyper-realistic areolas and nipples over the mastectomy scars that marked their battle with disease. (He also invented a custom piercing that functions as a prosthetic nipple, a project he's still working on with the assistance of biomedical engineers.)

Granted, creating the illusion of depth is hardly rare in contemporary tattooing, and Instagram is filled with examples of hyper-realism and anatomy-inspired creativity. But replacing a lost fingernail was, to Catalano's knowledge, something that had never been attempted.

"Through my experience with the 3D nipple and areola reconstruction, I've learned how to mimic real life body parts," Catalano tells the RFT. "Using different skin tones, back shading, highlight features. When it came to doing the tattoo, I had no reference except for just the other nails sitting next to it."

So Catalano painstakingly copied the other nails. By the time the process was over, both artist and customer were stunned by the resemblance.

"We were all mesmerized, like, 'What the hell,'" Catalano recalls.

In the days since the photos of the fingernail work went viral, Catalano says he's been swamped with messages, not just from other individuals with missing fingers and toes, but people asking about belly buttons and nostrils.

"I'm not really sure where the limit is," he says.

However, Catalano adds that he is reaching his personal limit. As a matter of principle, he refuses to take money for tattooing nipples and areolas on cancer survivors, and he similarly refused payment from Bertram for the fingernails. Now he's grappling with hundreds of requests for hyper-realistic tattoos, even as he's not sure how much more free work he can do while still running a business.

To make up the difference, Catalano launched a GoFundMe campaign yesterday with the goal of raising $50,000 to fund free tattoo work for cancer survivors and amputees.

"I feel terrible charging the people who have already suffered pain and injury or battling life and death," Catalano wrote in the description of the campaign, which as of this writing has hit $2,200. "They've already been through so much."