For St. Louis' Homeless, Winter Was a Perfect Storm 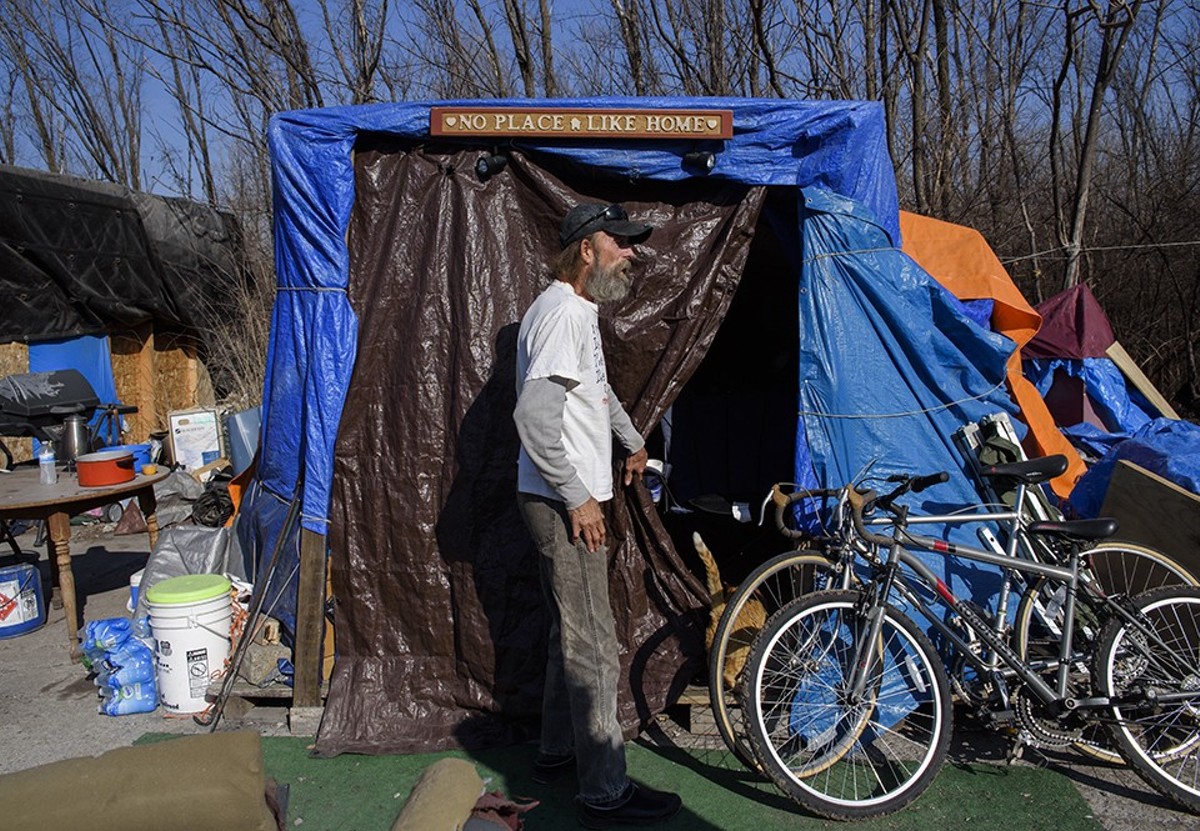 Homeless people in St. Louis have gotten by this winter any way they can. NICK SCHNELLE

Only the top of the St. Louis skyline is visible from the collection of tents and homemade sheds huddled together on a slab of concrete just east of the Mississippi River.

From here, on the edge of Illinois, inhabitants of the camp can see the smoke rise from the stacks of an old brick factory on the far banks. A slash of neon pink traces the outline of the Four Seasons Hotel in the Lumiere Place casino complex. And beyond the barren tree branches, the spidery trusses of the Martin Luther King Bridge point the way back, should they have any interest in going.

The people here — most of them, anyway — have taken their turns sleeping in St. Louis' streets and homeless shelters, and they have decided this is a better alternative. They at least know where they will be tonight. They will not be rousted out of their sleeping bags for violating a city curfew. They have no waiting lists to join, no hotlines to call.

"You don't have the people over there bugging you," Will Painter, 45, says, nodding toward the far side of the river.

St. Louis has in recent years tried to overhaul the way it coordinates services for people who are homeless. The goal is to shift so completely toward putting people in homes right away that only a small number of shelter beds will be necessary, and then only for short amounts of time.

But while nearly everyone agrees that is the right direction, St. Louis has not proven capable of pulling off the arrangement yet. The coldest winter in years has combined with the forced closure of New Life Evangelistic Center, previously the city's largest walk-up shelter, to overload the system with emergency cases. So far, at least two people have died in the cold — one in a dumpster and the other in the downtown port-a-potty where he was apparently living. Concerned church leaders opened "pop-up shelters" to fill the gap.

Weeks later, they continue to pack their halls night after night with folding cots. Some of their volunteers have not spent a night at home in weeks as they struggle to feed and house the overflow of people in need.

For anyone not lucky enough to get into a city shelter, the pop ups can be a godsend, even if they sometimes end up across town from where they started. Otherwise, they find themselves sleeping outside or simply wandering until the sun comes up and they can try again.

NICK SCHNELLE
Robert Gibson started building a homeless camp two years ago on the east side of the Mississippi after he got fed up with St. Louis.

Robert Gibson, the founder of the camp near the river, is happy to be away from all of that. Two years ago, he and a friend were walking nearby when they spotted the slab through the trees. They cleared away the brush and debris until they had a clean flat space. Gibson, a former diesel mechanic, built a shed out of scavenged and donated plywood, siding the walls with roofing tiles.

Other refugees from the city soon followed, until a half-dozen tents and hybrid wood-and-tarp structures appeared on the slab. A second, even larger camp sits back in the trees. A dirt footpath curves through the forest camp around a series of plywood huts, one a communal kitchen where the residents cook, keep a pantry and sometimes hang out around a wood-burning stove.

"I got tired," Gibson says of his time in the city. "Every time you turned around there was a police officer saying, 'We'll throw your butt in jail for 48 hours.'"

He is 58 years old and suffers from a bad heart. His "winter beard" is in full effect, and he wears a T-shirt that says, "At my age I've seen it all; I've heard it all; I've done it all; I just can't remember it all." Between his camp and the one back in the trees, twenty or so people now live within the two communities. Many, like Gibson, have fled St. Louis in frustration. Dee Dunn, 50, says she lived with her son and daughter-in-law until the son "got a little violent with me." She slept on friends' couches for a while but says she needed at least a temporary bed.

"I called all the shelters in St. Louis, and they just kept giving me numbers and numbers — and they were the same numbers I was calling," Dunn says.

She eventually hopes to qualify for disability benefits and move into an apartment, but for now, the camp is home. Gibson clearly prefers it out here to what he saw in the city, but he cuts through any "off the grid" romanticism. Living through a dangerous winter without reliable heat, power or even running water is treacherous, he says as he limps around below a sign that reads, "NO PLACE LIKE HOME." Another camper tackled him into a pair of bicycles several weeks ago — what he says was the camp's first dispute in two years — and cracked six of his ribs. His list of chores for the day includes finding fire wood; the pallets they were burning to keep warm are all gone. The weather is freezing even during the day.