How an Unlikely Coalition of Family, Marijuana Activists, Redditors and a GOP State Rep Freed Jeff Mizanskey from Life in Prison 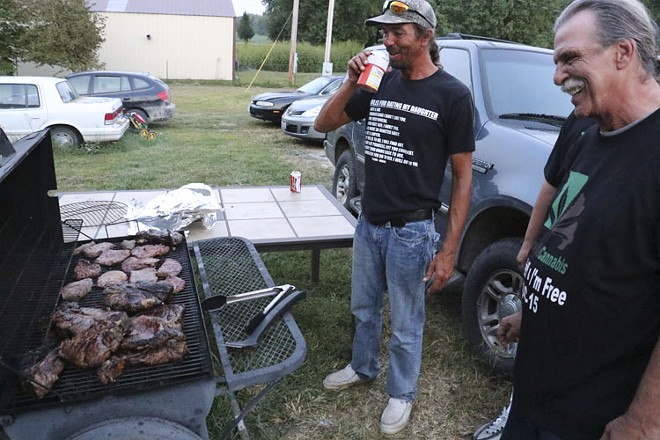 Ray Downs
Mizanskey after his release, barbecuing with son Robbie.

Spend more than two decades of your life in one place, and you make close friendships, even in prison. The eleven days between the announcement of Mizanskey's release date and his actual departure featured numerous teary good-byes.

One of those good friends was his cellmate for the last few years, Neldon Neal. The 68-year-old Springfield man is currently serving a 16-year sentence for voluntary manslaughter after shooting his wife while intoxicated. His story got some press after he eluded police for 62 days before finally getting caught hiding in the Mark Twain National Forest.

"He might have been more excited for me than I was for me," Mizanskey says jokingly. "Every day he'd say how many more days I have to go, how many hours, that kind of thing. Lots of people were doing that. It was like a big countdown. Even some of the guards were saying things like, 'Just five more days, Mizanskey.'"

Some friends he never got to say good-bye to, including Floyd Newberry. Newberry murdered his wife in 1976 for insurance money — and while he actually had the possibility for parole, he had to serve 50 years of his sentence first. He didn't make it, succumbing to cancer two weeks before Mizanskey's release.

Mizanskey did time with a lot of people who committed horrible crimes, but when you're serving a life sentence in prison, you befriend the people who surround you. And watching friends die behind bars was a grim reminder of what would happen to Mizanskey if he never got out.

"It's hard to get medical treatment in prison," he says. "You have to go through so much bureaucracy just to get help, and even then you might only get to see a nurse practitioner instead of a doctor. If I got seriously ill, who knows what would happen to me? I suspect they'd just let me die, too."

A few days after his release, Mizanskey points to the baseball-sized tumor on his left forearm as proof.

"I couldn't ever convince them to take this out. I've had this for years, and it has just gotten bigger. They just tell me it's fine, don't worry about it — but it's kinda hard not to worry about."

Freed from prison just twelve hours ago, Mizanskey sits at the kitchen table in the home of his oldest son, Robbie, on the outskirts of Sedalia. He has more he wants to say about prison — ways to improve it, ways to keep people like him out of there — but Robbie, a lanky sheet metal crew supervisor, takes his father's mind off all that.

"Look at this, Dad," Robbie says, revealing a tray of thick, lightly seasoned steaks, ready to go on the grill outside.

"Oh, man — that is beautiful," Mizanskey says with a grin.

"And this one's yours," Robbie says, pointing to the biggest cut on the tray — a gigantic T-bone about a foot long and three inches thick. It must weigh at least two pounds. Robbie raises cattle on the side and told his butcher to cut a special steak for his father.

Mizanskey laughs. "I ain't gonna be able to eat all that, but I guess I can try."

As Robbie takes the steaks outside, his wife, Jennifer, sets the side dishes on the table. Among them is a neon green pasta and vinegar dish that Mizanskey's brother Mike brought from a restaurant in Chicago. It was a childhood favorite of Mizanskey's, who grew up in the Windy City, and he can't remember the last time he had it.

As dinner is being prepared, Chris and Mike go over a list of media interviews lined up for Mizanskey over the next few days. He'll have a lot to do — more family to meet, a party, and an invitation to a suite at Busch Stadium to watch the Cardinals take on the Cubs.

"You sure you don't wanna hold off on some of these interviews just for a few days to relax?" Mike asks.

"No, I want to get the word out while I can, help the movement," Mizanskey says. "There's some momentum, and it's good to talk about this now."

He means it. Mizanskey has often said that it wasn't the courts that helped him; they only hurt him. Rather, it was the work of activists, including his family, that forced Missouri politicians to look at the serious problems with the state's drug laws.

"We need to do find alternatives to throwing people in prison for these nonviolent crimes and releasing people like Jeff, nonviolent criminals who have nothing more to gain from being in prison," says Rep. Fitzwater, who plans to invite Mizanskey to the state capitol to meet other lawmakers and talk about alternatives to prison for drug offenders.

Outside, Robbie mans the grill and flips the steaks, giving special attention to the gigantic slab of meat.

"I was about nineteen or twenty when he got locked up," says Robbie, now 42. "When they said life in prison, I didn't even know what to think. I can't even describe it. It's horrible."

Jennifer comes out to check on him. Before she heads back inside, she turns around and says, "Hey, Robbie — your dad's home for dinner."

Ray Downs is a former staff writer for the Riverfront Times. He first wrote about the Jeff Mizanskey case in October 2013.