How To Buy One of St. Louis' 250th Birthday Cakes 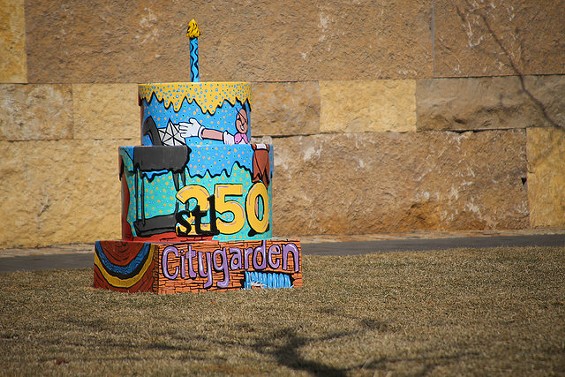 As St. Louis' 250th birthday year comes to a close, it's time to find new home for the 250 birthday cakes spread across the region. The question is: Who will take the cake?

Now Stl250, the volunteer group organizing the year-long sestercentennial celebration, is auctioning off many of the cakes painted by local artists to decorate the city.

The nonprofit has launched a new group, called the 1764 Society (in honor of year of St. Louis' founding), dedicated to building Founders Plaza, a gathering place around the Market Street statue of Pierre Laclede. World's Fair sculptor George Julian Zolnay created the sculpture of Laclede stepping off his boat onto the riverbank of the future city of St. Louis in honor of the city's 150th anniversary.

Not all the Cakeway to the West cakes are up for auction. So far, 67 cakes -- including the Gateway Arch cake, Anheuser-Busch Brewery cake and Saint Louis Zoo cake -- are up for bidding, which ends January 1.

Which cakes are bringing in the most dough? As of Wednesday morning, the Grant's Farm cake was leading the bidding with $400. The Anheuser-Busch Brewery cake has a high bid of $315.

Or if the prices for St. Louis' big birthday cakes is more than you can stomach, a local business is also selling STL 250 baby cakes, miniature versions of the cakes you can decorate yourself.