A St. Louis University professor shares what she learned by watching her students go offline 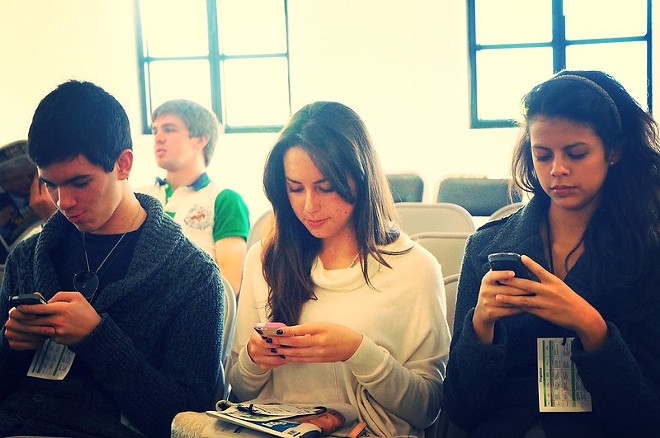 When I described the assignment, the class let out a collective groan. Students would spend 48 hours without their favorite app. “TikTok is a thing!” one protested. Others grasped their phones more tightly.

The class is called “The ‘I’ in ‘Internet,’ the ‘Me’ in ‘Meme’” (title partly cribbed from author Jia Tolentino) and it is designed to help students think about social media’s role in their lives and in the world. Part of Saint Louis University’s new Core curriculum, this Ignite Seminar encourages students to learn through personal self-reflection. What is more personal than our phones? Responses to the assignment varied. Here is what students had to say:

One student spent a lot of time on TikTok “whether between classes, before bed, or even while I was eating.” Not having the app allowed her to devote time to other things. She took walks, tried new coffee shops, and baked cookies. She reported that “deleting TikTok made it easier to leave my phone alone.” Most important, being without the app allowed her to connect with her mom when she went home over the weekend. “I was grateful that I didn’t have TikTok because it let us connect again on a personal level. I was able to put my phone down and just enjoy the present moment with her.”

Another student found that deleting Instagram helped her feel better about her college experience. “My transition to college has not been ideal, while my friends have shown on their Instagrams that they are transitioning just fine,” she explained. “Not having Instagram allowed me to be happier as I was able to enjoy being at SLU and not compare my experience to anyone else’s.” If comparison is the thief of joy, deleting an app can mean reclaiming happiness.

Apps not only steal joy, they also steal time. A third student found that “the absence of TikTok increased my time with my family and friends immensely.” He initially felt bored and annoyed that he didn’t have the app, but then he found other things to do. “I began to go over to friends' dorms much more than I had been.” He says time with them took his mind off the app. “I had a lot of fun spending time with friends instead of just sitting in my room wasting time on TikTok.”

Understandably, I got some pushback. One student found it disruptive to her personal and academic life. An extrovert from the Northeast, she Snapchats her boyfriend and friends abroad each day and organizes group work on the app. She declared herself a proud techno-optimist and observed, “To me, this experiment seems like a back-handed way for educators and people of older generations to make the younger generation feel guilty for taking advantage of the opportunities that come with social media. It highlights the older generation's reluctance to change and adapt as technology becomes more and more present in our society.”

As the old educator in question, I shook my head at the folly of the young, their desperate reliance on something as frivolous and harmful as social media. The research is clear: our apps steal our attention, mine our data, and polarize our communities. I thought I knew better. That is, until my own assignment came for me.

Unlike my students with their image-rich TikTok and Instagram, I like the wordy nerdiness of Twitter. It always seemed like a lark, a distraction, until a billionaire bought it and ran it into the ground. Watching my favorite app implode, I feel my students’ pain. I have somehow managed to avoid most of Twitter’s nastiness and found a strong community of academics and activists in my field. Saying goodbye to those people feels like a tremendous loss. I wish I was only contemplating a two-day break.

I’m not yet ready to leave Twitter. There is no satisfying alternative. But I can see the day coming when the bad will outweigh the good. When that time arrives, something precious will die. I will keep writing, I will keep thinking, but I will be left with a critical question: Where do I post?

Liz Chiarello is an associate professor in the department of sociology and anthropology at Saint Louis University and a former fellow at the Radcliffe Institute at Harvard University. Her research examines technology, law, and the overdose crisis and her book Policing Patients is under contract with Princeton University Press.

The RFT welcomes well-reasoned essays on subjects of local interest. Contact Rosalind Early at [email protected] if you have something to say.