Rent Strikes and Lawsuits: A Reckoning for a Controversial Landlord 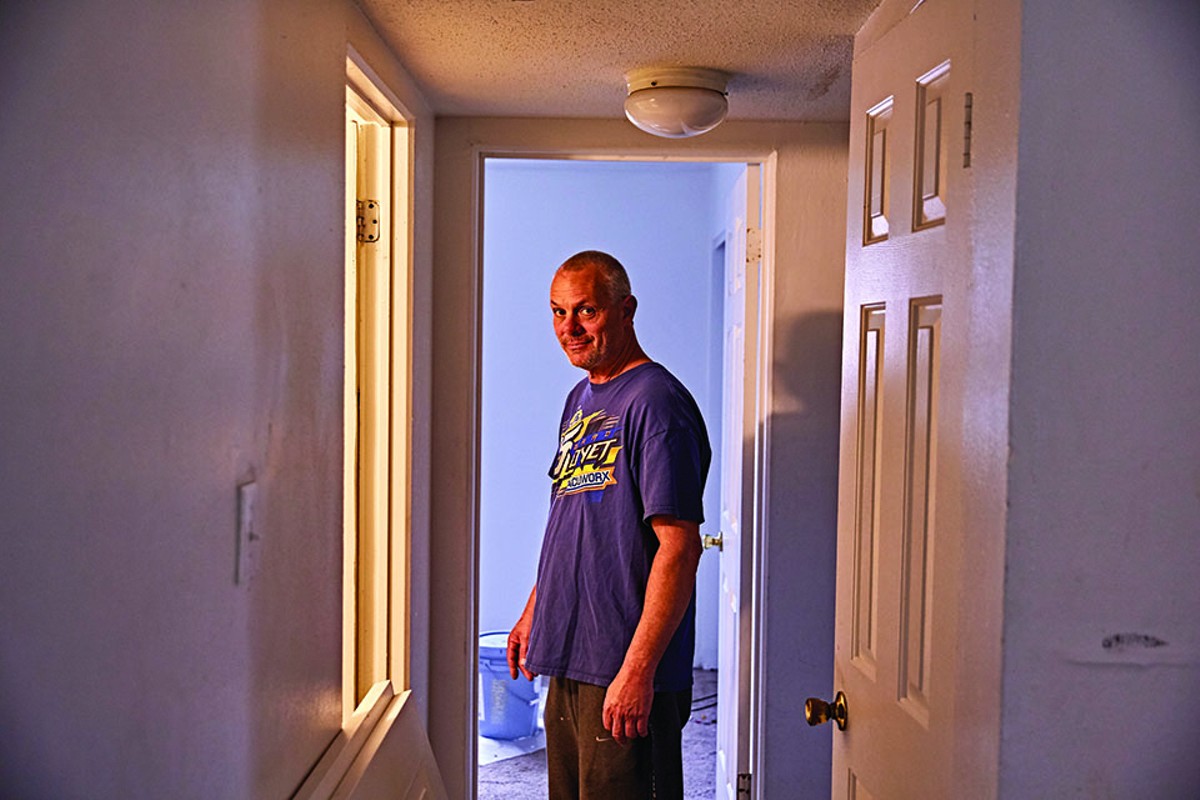 Bobby Giammanco and Lisa Jones, who live in the Southwest Crossings, did their own repairs after maintenance workers quit over unpaid labor. THEO WELLING

The first Saturday of December, I visited the Southwest Crossing apartments in the south-city neighborhood of Carondelet because a group of residents there had declared a rent strike. The striking tenants stated publicly that TEH Realty, the vague and largely absent entity that owned the property where they lived, would get no more of their rent until their demands were met. Their demands included air conditioning, heat, maintenance, removal of mold, and doors that locked.

A rented U-Haul idled in one of the parking lots outside the complex. In another lot, two men loaded a mattress into a trailer behind a truck.

"This is the ultimate rent strike," said one of the men securing the mattress in the trailer. He was helping Eli Findley, a tenant in his 30s, move out.

Findley moved into Southwest Crossing in March 2019, and even though he signed a year lease, he was leaving three months early. He wasn't particularly worried about breaking the lease. The main office was staffed only sporadically, and in general the people running the place, whoever they were, didn't seem to have their act together enough to enforce any penalties an early exit might incur.

Never in Findley's nine months at the Crossing was it an ideal place to live. Maintenance was slow if it happened at all. Roaches were prevalent. For a while Findley's air conditioner ran nonstop unless he shut it off at the breaker. Another resident had to control his unit's water at the main — if he wanted water he had to run all his sinks and shower at once. But things really started going downhill in October, Findley said. Not coincidentally, it was around that time the administrative staff and maintenance workers stopped getting paid. When Findley went to the leasing office to pay his November rent, a maintenance worker told him not to bother. There was no one working in the office.

Since then, Findley said, people have been on his roof stealing air-conditioning units and copper wire. His apartment has had plumbing backups, and there's no one to fix them. Elsewhere in the complex, a portion of a roof collapsed. While hearing gunshots isn't exactly uncommon in the city, Findley has heard not only the bang of gunfire but also the clink of shell casings bouncing on his sidewalk. According to police records, in just the past month the apartment complex had seen two instances of breaking and entering, two assaults and a theft of a car, among other crimes.

As Findley put it, "It's like when the teacher leaves the classroom. Kids start acting up. It's the same thing here. When there's not a management company to hold anybody responsible, everyone is acting out."

Bobby Giammanco is one of the maintenance people who stopped working when TEH stopped paying. He lives with Lisa Jones in an apartment next to the leasing office. When I met him he was getting ready to barbecue on the narrow strip of concrete between his door and the sidewalk. Giammanco said he's owed for 96 hours of work. Among other indignities, he and Jones have endured at least a half-dozen plumbing backups since they moved in to the Crossing a year ago. The bathtub and toilet have overflowed. They've had to jerry-rig a trash bag in a five-gallon bucket just to meet basic needs.

A number of the apartments here have been deemed unfit for human habitation, but that doesn't mean they're not being used. Jones is an early riser, and before the sun is up, she sees squatters leaving these condemned units and heading back towards the River Des Peres.

"I don't have any bad feeling toward them," she said of the squatters. "They need a place to crash. I get it." She paused and pointed to the nearby industrial plant next door. The website for the plant describes it as a "global leader in industrial additives," and Jones said some mornings its thick exhaust wafts toward these apartments. "This place is a shithole," Jones added. "That's all it is."

The 328-unit Southwest Crossing complex has been reviewed by residents on Google 51 times. The average rating is 1.6 stars out of five. Google doesn't allow a zero-star response. Michael McKinney's write-up from May is pretty representative: "The 5-star reviews are from the management staff. They could have at least used fake names. This is the home of bedbugs, roaches, and bad customer service ... But if you're ever late on your rent, they have multiple plans of action. Welcome to Hell."