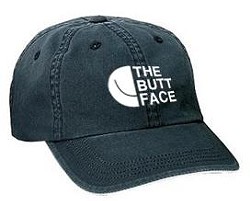 thebuttface.com
Judge: Stop being such an ass hat!
In August we told you about Jim and Jimmy Winkelmann and their new clothing line, Butt Face, that they launched in 2010 on the heels of a court-ordered injunction against their previous clothing company, South Butt.

Per that ruling, the Winkelmanns were prohibited from ever again reproducing and/or imitating the famous trademark of outdoor apparel company North Face. So what did the St. Louis father and son do?

They founded an LLC called Why Climb Mountains and went about selling clothes emblazoned with a Butt Face logo (above) and the motto: Never stop smiling.

Just try telling that to the judge.

North Face has since filed a new lawsuit against the Winkelmanns, arguing that they and their Butt Face line are in violation of the previous injunction.

Yesterday U.S. District Judge Rodney Sippel strongly hinted that he has grown tired of the Winkelmanns' tongue-and-cheek businesses and their legal argument that they are protected as a parody -- not a competitor -- of North Face. (Sippel is the same judge who heard North Face's initial complaint against the Winkelmanns' South Butt.)

Wrote Judge Sippel in an order calling for the two sides to settle their differences (emphasis added):

If, as they claim, defendants want nothing more to do with plaintiff I believe this matter can be resolved without incurring any additional added expense to the parties and without wasting any more judicial resources. Therefore, I expect the parties to talk about settlement in good faith when they receive this Order and, if they do not resolve their pending dispute, they will be required to report on the status of these negotiations before the start of the hearing. In other words, it's time to stop smiling and start exploring a sensible resolution to this dispute.