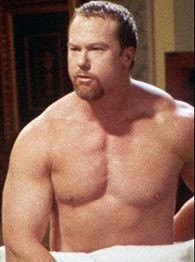 Mark McGwire: Fortunately we won't be hearing courtroom testimony on what lies beneath this towel.
Have you been following Barry Bonds' perjury trial this week in San Francisco? It's been -- how can we put this? -- nuts.

Seriously. On Monday prosecutors called Bonds ex-girlfriend, Kimberly Bell, to the witness stand. Why? To describe the home-run king's testicles -- what's left of them anyway.

According to Bell, beginning around 2000 Bond's testicles underwent a transformation. Specifically they were "smaller and an unusual, different shape." Bell also testified about how he developed acne on his shoulders, couldn't keep an erection (so much for rounding the bases in the bedroom!) and became increasingly violent -- once threatening to rip her implants out of her breasts because he'd paid for them. Ouch!

Bell claims that Bonds told her that he used performance-enhancing drugs because he knew they had worked for the former Cardinals' slugger, whom he eventually dethroned as the single-season home run leader.

And in reading Bell's testimony (however flawed it may be) I couldn't help returning over and over to Big Mac. Specifically, I was thinking how smart his lawyers were in having McGwire stick to that embarrassing "I'm not here to talk about the past" monologue he used when subpoenaed to testify before Congress. In so doing, McGwire escaped having to go on trial for lying to prosecutors about steroids as is the case with Bonds.

Moreover, he never had to subject himself to a public discussion on the state of his testicles. That issue was officially laid to rest last year when McGwire admitted using steroids.

Sure, the confession came years too late. Still, I'll argue that it required some real balls -- no matter how misshapen or tiny they may be. Thankfully, we'll never know.