ksdk.com
Marquise Atkins
Marquise Atkins, 19, of the 4200 block of Meramec in south St. Louis, was sentenced to 70 years in prison last week for the 2008 murder of Terrence "Terry" Mims.

Atkins was convicted in December of killing 19-year-old Mims near Northwest Middle School in north St. Louis on June 22, 2008.

In a Fox 2 story last year, Mim's cousin recalled how Atkins had come up to them following a game of basketball and demanded Terry's gold necklace. 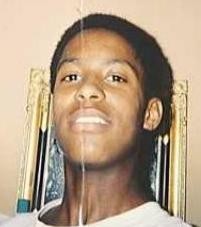 ksdk.com
Terrence Mims
"My cousin took the chain off no problem and gave it to him," said Justin Mims. "Then another guy walked up ... punched my cousin, my cousin took off running then they started shooting him...as we were running, I turned around, I heard the third shot, I remember seeing my cousin just fall."