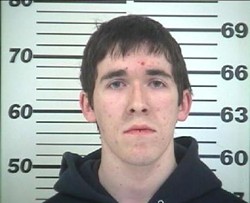 Last week, Daily RFT told you about the search for a serial masturbator on the loose at the University of Missouri.

According to KCTV, Gallagher (pictured here) is believed to have entered the school through an unlocked window on eleven different occasions between January 27 and March 23. Authorities say he removed underwear from the boy's locker room, spread it on the floor and "defiled" it.

Last Wednesday morning, a couple students saw Gallagher dressed in his FedEx uniform in the locker room and chased him off. One of those students said that, two days, earlier he found a used condom tied onto a shoe left in his locker. He thought one of his fellow students left it there as a joke. Now he suspects differently.