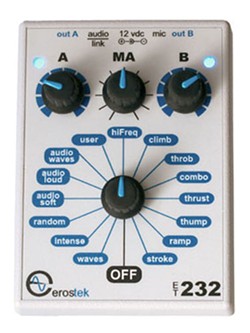 One of the devices used to torture the victim was an "Erostek" electrical charge.
The torture is almost too twisted to imagine. The "owner" of a former teenage runaway turned "sex slave" tortured the woman by allegedly sewing her urinary opening and vagina shut to "show what he expected of her."

Federal prosecutors call it one of the "most horrific" sexual abuse cases they've ever seen. Bagley and four other men -- including Bradley Cook of Kirkwood -- are now in custody accused of participating in the sex-slave operation.

According to authorities, the now 23-year-old female victim was a 16-year-old runaway back in 2002 when Bagley, 43, coerced the mentally disabled girl to move into his trailer outside Lebanon, Missouri, with the promises of making her a model and a dancer. (He came through with the last promise by allegedly forcing the woman to work at a strip club.)

Soon after moving in with Bagley, authorities say, the girl was plied with marijuana, ecstasy and pornography. After she turned 18, Bagley allegedly forced the girl to sign a "sex slave contract" and branded her with an "S" tattoo for slave as well as a tattoo of the Chinese symbol for slave. Bagley allegedly told the girl that the sex-slave contract "never" ended, according to the indictment.

Bagley then allegedly "beat, whipped, flogged, suffocated, choked, electrocuted, caned, skewered, drowned, mutilated and hung" the girl to enforce the contract. By 2005, authorities say, Bagley was advertising the girl on the Internet, offering people the opportunity to pay to have sex or torture the woman.

That's how Cook -- who resides in 11500 block of Big Bend -- allegedly got involved in the case. (Yesterday, Fox 2 was outside Cook's ranch home that indistinguishable from its neighbors save for the yellow "Don't Tread on Me" flag flying from a pole in the yard.)

The woman's nearly seven years in captivity ended in February 27, 2009, when she had a heart attack from the electric-shock torture and was hospitalized. An 18-month investigation followed, with the indictment unsealed yesterday. Three other Missouri men charged in the indictment include:
You can read all 20 pages of the indictment below that contains even more gruesome details about the alleged torture.
Bagley Indictment