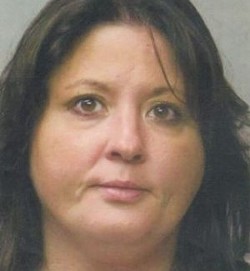 Elizabeth Thrasher: Lives up to her surname in online feuds.
Missouri's cyber-harassment law has teeth. But does it have bite?

Not when you consider a case this week that seemed like it would be a slam dunk for prosecutors to win a first-ever conviction for the state's 2008 law to crack down on online bullies.

Jurors in St. Charles County heard how a divorced mom, 41-year-old Elizabeth Thrasher, got into an online feud with the daughter of her ex-husband's girlfriend in 2009. Thrasher had blamed her ex's lover for being a bad influenced on Thrasher's children -- drinking and smoking around her kids and negatively affecting their eating habits.

The girlfriend, btw, has her own child -- the now 19-year-old Daniele Pathenos -- who heard about Thrasher's complaints about her mom and sent Thrasher a profanity-laced message on MySpace telling her to back off. Thrasher and Pathenos then traded several messages back and forth until Thrasher struck upon what must've seemed like a brilliant solution to ending the spat. She took photos of Pathenos from her MySpace page and posted them onto Craigslist's "Casual Encounters" section along with the girl's phone number, email and place of employment.

Suddenly Pathenos started receiving phone calls, texts and nude photos from guys looking to hook up with her. One of them even stopped by her work. The teen became so frightened of the creeps she quit her job, telling jurors she thought one of them would rape her.

(How this feud ended up in court -- and not Jerry Springer -- we'll never know.)

After deliberating for two hours yesterday the jury returned its verdict and, in so doing, confirmed what you've long heard about the Internet: It really is the Wild West -- a place where you're free to do whatever the hell you want without any fear of the repercussions.

"The state did our part," prosecutor Jack Banas told the Suburban Journals yesterday. "I think there are some difficulties with the statute that were brought to our attention."

Those "difficulties" include a part of the law that says the harassment must be done "without good cause." For example, was Thrasher justified in escalating her MySpace feud with the teenager into a fake sex ad on Craigslist? That seems like a tough argument to sell and something of a slap in the face to the memory and legacy of Megan Meier.

Meier was a 13-year-old girl, also from St. Charles County, after whom the Missouri's cyber-harassment law was was fashioned. Meier committed suicide in 2006 after an adult neighbor, Lori Drew, created a MySpace page for a fictitious boy who she used to friend -- and eventually un-friend -- Meier.

The girl hanged herself in the closet the day that Drew's fake boy broke up with Meier, telling her on MySpace: "Have a shitty life. The world would be a better place without you."

Under the "Megan Meier" law, adults can be charged with a felony -- punishable by four years in prison -- for repeatedly harassing a minor online. Other penalties include a year in prison and misdemeanor charges.