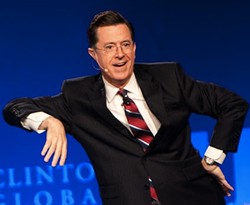 It was a big weekend for celebs in St. Louis. Stephen Colbert was here to interview Bill Clinton at Washington University. Mike Tyson was here for his one-man show. Oh, and Matthew Perry was also at the Wash. U. event. (And Chelsea Clinton. And Jack Dorsey. And others.)

(It's also a major week for St. Louis celebs being celebs out in the world, too!)

Check out RFT's photos below from the Clinton Global Initiative University event...plus our favorite tweet from Perry, who is totally unimpressed by the former president of the United States.

And here's a video from the event, followed by our best photos of Clinton, Colbert and others: