LEMEN COLLECTION ST. LOUIS PUBLIC LIBRARY
A 1932 photo of a St. Louis street, one of hundreds of unidentified images in a photo collection.

The Lemen Streets and Sewers Collection is a trove of historic images from St. Louis' past — but it also contains the mystery of hundreds of unidentified photos, from quiet streetscapes to bustling intersections, all offering windows into the everyday life of the city about 100 years ago.

One image shows a street corner facing a drug store. The background is crowded with a line of early model automobiles parked along a block of close-set buildings. Like many of the photos in the Lemen collection — the photos were originally contracted by the city's Streets and Sewers Department to document infrastructure and ongoing projects between the 1920s and 1930s — this one lacks any notation about its location or date.

SEE THE PHOTO COLLECTION: The Library Needs Your Help to Identify These Historic St. Louis Photos

Solving the mystery of that photo required only a little detective work. Mike McCubbins, a Creative Experience Assistant with the St. Louis Public Library, used the library's records and eventually pinpointed the exact location of the photograph to a spot downtown.

Today, if one faces east from the same place the photo was shot, the drug store is gone — as is the entire block of buildings. Instead, there's the Gateway Arch.

LEMEN COLLECTION/MIKE MCCUBBINS
Mike McCubbins tracked down a photo in the Lemens collection (above) with the exact spot near the Gateway Arch today (below).

"I zeroed-in on where the drug company would be across the street," McCubbins says, explaining his research strategy. "It's right there, at the entrance to the Luther Ely Smith Park. Right at that spot."

McCubbins says he and other staff have managed to identify additional images, but the sheer number of unidentified photos means the job is just too big for the library to handle on its own.

That's where he's hoping the public can come in: On August 16, the Barr branch of St. Louis Public Library is hosting the first of two Street Smarts events designed to give volunteer researchers the tools and references they need to discover the whens, whos and wheres of the unidentified photos.

That doesn't mean the task will be easy. The St. Louis of the Lemen collection, captured in black and white, is a far different place than the city of today. Like the riverfront neighborhoods razed to make way for the Gateway Arch, the sweep of a century's worth of construction has erased numerous structures and landmarks. Other photos in the collection have resisted identification because, while they include people, they show little hint of the locations. That has left researchers like McCubbins with images of men walking on a dirt road toward a worksite, a little girl on roller skates and a row of women posing outdoors with mops and buckets.

LEMEN COLLECTION ST. LOUIS PUBLIC LIBRARY
One of the few posed portraits in the Lemen Collection, which mostly features photos of St. Louis streets and building projects in the 1920s and 1930s.

Starting in 2019, the St. Louis Public Library began making the Lemen collection available online, and to-date, more than 1,600 images are viewable through the library's website. Still, hundreds remain unidentified, including additional photos that have not yet been uploaded online.

That's where the library is hoping volunteer researchers can contribute. The Street Smarts events will give participants access to printouts of unidentified photos, records from the library's rare books department and access to city directories and historic maps originally created for use by fire insurance companies.

Along with the research tools, participants will have access to McCubbins and librarian Renee Jones, the Research Manager in the library's Rare Books and Manuscripts division and curator of the Lemen collection. Both staffers will be on-hand during the August 16 and September 16 events to help participants identify details about the century-old photos.

For McCubbins, a new photo investigation often starts with looking for a church steeple somewhere in the background — "They tend to stick around for a century," he notes — and then attempting to locate photos in the same area, or comparing the business names and parcel numbers against modern maps and directories.

"On my end, it's really just a whole lot of fun to identify photos," he says.  "There's so much added information in there, all the businesses, the people, it's the history of St. Louis itself."

The effort to identify the photos is ongoing. Along with the events scheduled in August and September, each image in the Lemen collection that's available on the library website includes a link to a dedicated Google form. Visitors scrolling through the collection who recognize details or people can use the form to share what they know about a particular photo — enriching the Lemen collection with their own histories, or detective skills.

For more information on the upcoming Street Smarts events, visit the St. Louis Public Library website — where you can also click through the Lemen collection. 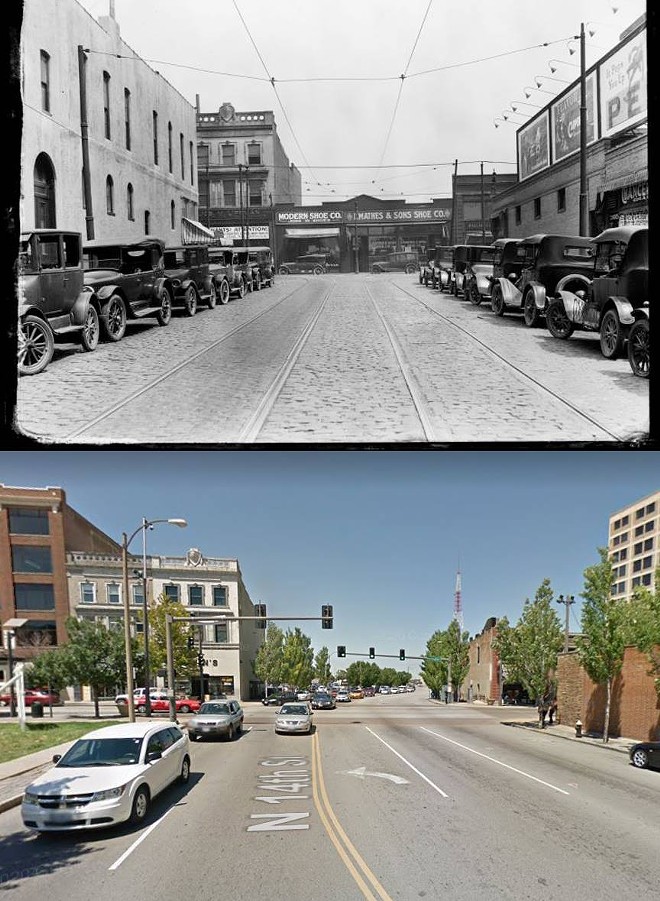 LEMEN COLLECTION/GOOGLE
The location of an image from the Lemen collection (above) was identified by McCubbins, who connected it to North 14th Street facing Washington Avenue.