Record-Breaking Kindness: Goodwill Aims for a Million Donations in 2010 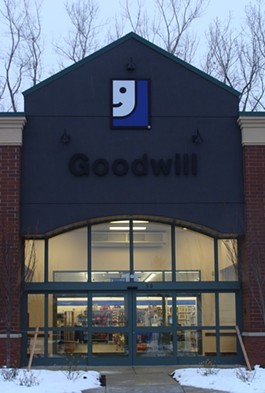 image via
How charitable are you feeling today? If the answer to that question is "at least a tiny bit," MERS/Goodwill is looking for YOU.
The local chapter of the charitable organization has collected 914,000 donations this year, and they've got their hearts set on crossing the million-donation milestone before 2011 rolls in.
Seriously, guys, it's the third day of Hanukkah. You ate your third judgment-free chocolate from your Advent calendar this morning. Festivus is whenever you Seinfeld-worshiping dummies decide it should be. Let's show a little holiday spirit, yeah?
Don't be an asshole -- pop behind the cut to read a pretty convincing argument from MERS/Goodwill president and CEO Lewis Chartock about why you should part with some of your gently-used junk.
Even though 2010 will go down in the history books as a year of economic depression, Chartock says Goodwill, named the third-largest non-profit in the region by the St. Louis Business Journal, has helped more than 14,000 people just with the donations they have received, not even counting their welfare and job training programs.
"We've had a steady progression of donations this year," he says. "The people of St. Louis and the state are just wonderful. We've had more and more goods donated. That's better for us. It all starts with the donations, so no, I'm not surprised that it was a good year."
Next year, Chartock says, the group aims to help more than 18,000 individuals.
"What we want to do is serve the middle-class people who are out of work, the 9.2 percent of our neighbors who are unemployed," he says. "What we are constantly thinking about how we might serve those individuals better."
To help reach its goal, Goodwill is accepting donations at its 40 stores in the region, as usual, but additional donation points will be added. For example, the Helping Kids Donation Drive at malls runs through the end of the year, and people who bring gently used shoes to JingleFest at the St. Charles Family Arena on December 12 will be entered to win upgraded front row seats. The organization is also working on a way to honor their millionth donor -- stores keep detailed daily records, so Chartock and his team know the store statistics down to the very last digit.

The previous record for annual donations was 875,308. Yet Chartock is confident that Goodwill will reach the million mark this year. As for next year? Chartock says that his goal is "I don't know, two million? I'm joking! I would be just delighted if we can keep cracking at this pace."
Pressed, he says he hopes for a 10 percent increase next year. That's 1.1 million donations.