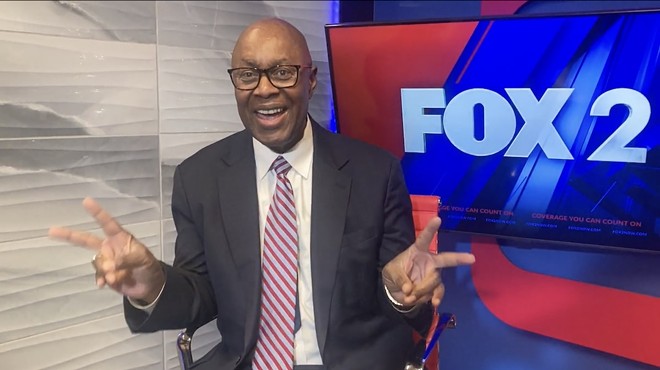 SCREENSHOT FROM FOX 2'S REPORT
The veteran reporter is alive and well, despite what you may have heard.

Those in the St. Louis region who misuse taxpayer funds are going to have to re-cork that champagne.

Veteran watch dog journalist and host of Fox 2's "You Paid For It" segment Elliott Davis is very much still alive.

Earlier today, a Facebook page called Jefferson County, MO posted an image of Davis along with the words "Rest in Peace 1954 -2022."

The page bills itself as parody and satire, and many of its posts are clearly jokes. But because there was nothing about the Davis post to indicate it as such, many people initially took it at face value.
Davis is one of the city's most well-known local journalists in large part because of his long-running "You Paid For It" segment, which highlights government waste and other shenanigans perpetrated by people in power on the taxpayer's dime. His best reports often include an elected leader refusing Davis an interview only to be later accosted by him, microphone in hand and camera running.

In a comment to Fox 2 News, the person behind the Facebook page said they made the post to “make a point about media literacy, common sense, and because it’s kinda funny to laugh at people who believe everything they read on Facebook. We wish no actual ill will towards Elliott or anyone affiliated with KTVI or Nexstar.”

Davis seems to be taking all this in stride, posing for a photo holding today's issue of the Post-Dispatch. He said that throughout the day he'd been receiving phone calls from alarmed friends and his children about the post.

"I am here. I am well. I am just fine. As a matter of fact I am going to anchor the news today and do a You Paid For It tonight," he said in an interview with his own station.

Others at Fox 2 were less sanguine about the fake news of their colleague's death. Jasmine Huda posted to her Facebook page, "I don’t know who came up with the sick rumor of his passing but the man is at work....'You Paid For It' should be, 'You’re Gonna Pay For It!'”