Road Rage Shooter Gets Comeuppance When His Victim Shoots Back 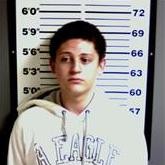 An unidentified 35-year old Franklin County man survived a harrowing ordeal that began with him and his two young children being followed on the road, shot at and then turning the tables on his assailant.

The man was driving on Highway W when he noticed a slow-moving car pull off the side of the road. He arrived home and heard a gunshot, which hit his car window. Another shot hit his house -- the shooter was the teenage driver of the mysterious car, who had followed him home.

At this point, the man rushed his children inside and returned with a handgun. He also called his neighbor, who brought a shotgun. Both sides opened fire.

Neither side hit anything, but the gunfire succeeded in forcing the shooter to flee, and police arrived to take over pursuit. They chased the man down Highway W, which dead-ends at Meramec Caverns. The suspect kicked open a cabin door, briefly held the campground manager hostage and was eventually convinced to give himself up by Franklin County Emergency Response Team. Nobody involved sustained an injury.

The suspect, an 18-year old St. Louis teenager, was driving a stolen car. It's unclear what set him off, but he's now facing charges of first-degree assault, armed criminal action and unlawful use of a weapon. Neither the target of his rage nor the neighbor are facing charges.