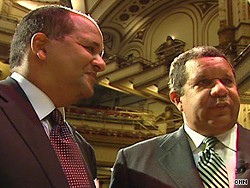 cnn.com
In 2009 CNN pegged Steven (left) and Michael Roberts empire at $1 billion.
Given its daily lineup of reruns of Roseanne, Cosby Show, Tyler Perry's House of Payne, and tired crime-show dramas, one might think that WRBU my46 wasn't paying anything for its programming.

Turns out, maybe it's not. As The Hollywood Reporter chronicles today, the station owned by brothers Michael and Steven Roberts is being sued by Warner Brothers for $1.4 million for failing to pay for shows aired on their three CW affiliates that include WRBU and stations in Jackson, Mississippi and Columbia, South Carolina.

CBS is also suing the brothers' St. Louis company, Roberts Cos., for the same infraction, joining Warner Brothers in accusing the stations of airing programs after they were told to stop doing so because of non-payment. The shows include Friends, Extra and TMZ.

This isn't the first time the Roberts have been sued for not paying for programming. Last year the company settled a suit by 20th Century Fox alleging the same thing. Jeanne Roberts Johnson, daughter of Michael Roberts and general counsel for Roberts Cos., tells Hollywood Reporter that the economy has impacted the broadcaster.

"We are not insolvent per se," Roberts Johnson told the California publication. "We are currently operating."

The Roberts brothers have owned the station since 1981 and have gone on to make fortunes in real-estate development. Their St. Louis properties include the Roberts Orpheum Theater downtown and Hotel Indigo in the Central West End. The brothers are also completing work on the $80-million Roberts Tower luxury condos in downtown St. Louis.