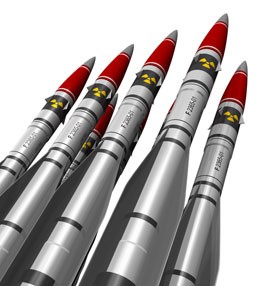 This weekend marks the fiftieth anniversary of the Cuban Missile Crisis, wherein the U.S. discovered Soviet missiles in Cuba, just 90 miles from Key West. This led to a 13-day showdown with the USSR, during which Americans were sure the world was about to end.

As we know, the world did not end because JFK brokered a deal with Soviet premier Nikita Khrushchev, and the Cold War continued for 27 more glorious years.

So what better way to commemorate this great event than a party?

At least that's what Steven Smith, the historically-minded barkeep of the Royale in South City, thought. The Royale has pictures of both JFK and RFK over the bar, plus Martin Luther King. It's pretty clear where Smith's political sympathies lie.

But the world didn't end! That is clearly something to be celebrated -- tomorrow night. Plus, it's a great opportunity for people to wear their finest Mad Men vintage (early seasons), eat Cuban food and hear some tunes from the time. And maybe re-enact a few of the scenes from the Cuban Missile Crisis episode of Mad Men, namely when Pete confesses his love for Peggy and Peggy tells him she had his child, and when Betty goes off and has sex with a random guy in a bar bathroom because, hey, the world is ending. (No great party is complete without a few heavy, drunken confessions and bathroom sex.)

Nevertheless, Breitbart News' Big Government seems to find something very sinister in Smith's plans to commemorate our salvation and give people the opportunity to wear cool clothes. Or, as the anonymous blogger puts it:

The Cuban Missile Crisis proved to be one of the most frightening chapters in 20th century history, a time when nuclear war was a very real possibility.

Now, a St. Louis-based bar known for welcoming Democrats like Sen. Claire McCaskill, is throwing a party this weekend to celebrate the 50-year anniversary of the U.S. potentially getting wiped off the map.

Oh, but the best part is, of course, the comments section!