You're kicked back on Honolulu's Waikiki Beach. Your toes are wriggled into the sand as palms sway in a languid breeze, and the sapphire water goes on for eternity. No Bud Light for you. The scene is a veritable commercial for a Blue Hawaiian or piña colada, coconut-centric drinks probably made with fruit from the very trees that stretch overhead. St. Louis lies a world and several time zones away.

But even in Hawaii, the corner of 23rd and Chestnut is closer than you think. Much closer.

And though Rio doesn't quite sell ice to Eskimos, it does enjoy a surprisingly brisk business in Canada. The opposite is true of Europe: Those guys don't go for ice in much of anything. Georgia, the one bordering the Black Sea, is one of very few exceptions.

Closer to home, St. Louisans recognize the brand from fairs, school picnics and roadside snow-cone stands, as well as heavy hitters including Grant's Farm, the zoo and Busch Stadium. Rio also supplies the Major League Baseball stadiums in Seattle, Houston, Kansas City and Denver. In fact, it's one of only a handful of companies nationwide to produce the luscious liquid sugar, and with close to 300 flavors (including no fewer than a dozen varieties of strawberry), it is certainly one of the most prominent.

This year, it is celebrating its 75th anniversary.

Rio got its start in 1940 when Stuart Tomber was a manager at the now-shuttered Rio Theatre in Walnut Park. Among his many duties was to order syrups for sodas, until he decided he'd rather make his own. He began selling his syrup to other theaters, and soon his side business became his only business.

These days Rio is still largely a family affair. Billy Tomber, 42, is the vice president of operations, a title that's much tidier than the job itself. Any day might find him fixing equipment or driving the forklift. Billy has worked at Rio since he was fourteen, and jokes that someday he'll hold a press conference to announce that he's leaving the business to "spend less time with my family."

But so far, so good: His dad, Phil (the son of the company's founder), is president, having taken over the business in 1980. Mom, Addie, is the flavor crafter. 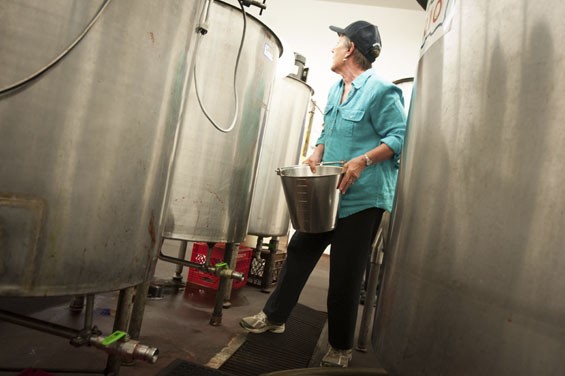 Rio has just five full-time employees, but that number more than doubles during peak season, which runs from roughly now through July. That's when production is at its highest, since the syrup is best when used within eight months. Customers in Australia and South Africa bump up business in December when their summers are just getting started.

The company has employed numerous sets of siblings over the years: Big sis starts, and all of a sudden it's the go-to summer job for the rest of the family. Billy's three younger sisters have all worked at Rio, and he has even begun to hire his own friends' kids.

And that's telling: In a market as niche as this one, loyalty is a big deal. "We have always used Rio syrups for all of our flavors and feel lucky that they are located right here in St. Louis," says Patricia Williams, co-owner of beloved snow-cone powerhouse (and multiple Best of St. Louis winner) Tropical Moose.

Rio has been with Tropical Moose since its beginning some twenty years ago, when it was a stand on Chippewa Street and River Des Peres Boulevard. Tropical Moose now has outposts in Webster Groves, Kirkwood Park and Kirkwood Farmers' Market. And while co-owner Jack Williams puts "a little bit of a secret twist" on some flavors (the "Monkey Snot," the "Motor Oil"), his wife says, "the basic syrup is still from Rio."