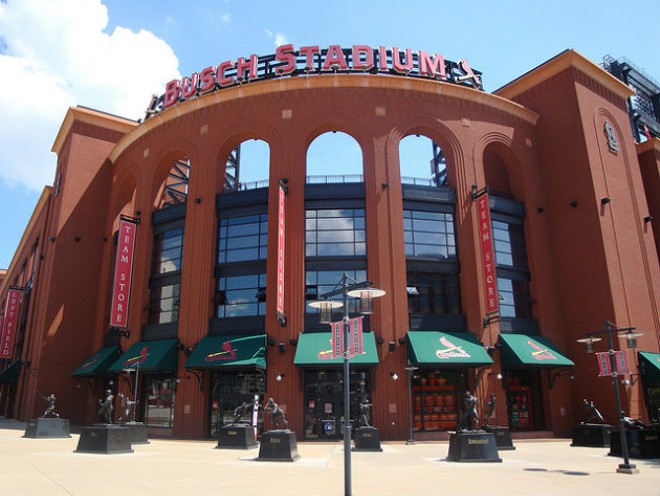 Photo courtesy of Flickr / Missouri Division of Tourism
The St. Louis Cardinals could get COVID-19 relief through the taxpayer-funded CARES Act.

In a message to key employees, provided to the RFT by spokesman Brian Bartow, team officials stated:

“We are suspending all operations that are not deemed essential during this period in which our baseball games and season have been postponed indefinitely as a result of the state and local mandates resulting from COVID-19.  As a result of doing so, we believe that we may be able to utilize the employee retention tax credit available under the new CARES Act to help us retain our full-time employees during this suspension of operations.”

The team did not respond to follow-up questions as to the amount of the tax credits, nor to whether other Major League Baseball teams had made similar requests to be part of the federal program. Sources told the RFT that some front-office employees have had to reduce hours — without a cut in pay — to keep the team in compliance with CARES regulations.

The Cardinals have publicly discussed their front office policies and indicated that they were not seeking federal assistance under the Paycheck Protection Program (PPP), a part the CARES Act which has been the subject of considerable national controversy over large companies getting funds unavailable to some smaller ones.

"The Cardinals have confirmed they intend to pay employees through May, at least, and they have not had layoffs as May approaches. The Cardinals’ operating costs include the salaries of employees and continuing mortgage-like payments on Busch Stadium," the St. Louis Post-Dispatch reported Wednesday.

“Last week, the Los Angeles Lakers took a PR bruise when it was revealed they received $4.6 million from the government’s Paycheck Protection Program. The Cardinals did not qualify for the program and did not apply.”

What wasn’t included in that story was that even though the team didn’t seek a loan through PPP, it still hopes to take advantage of the tax credit under the broader CARES Act. Bartow confirmed to the RFT that the team did not qualify for the PPP. It is not clear whether the tax-credit portion of the CARES program has different qualification requirements.

All Major League teams, except the Oakland Athletics, have committed to paying employees through May 31, The Athletic reported. But little is known as to whether other U.S. professional sports franchises have applied for CARES funding, other than the Lakers’ brief controversy. Here’s what the Washington Post reported Tuesday:

"Treasury Secretary Steven Mnuchin said Tuesday that any small business loan over $2 million will be subject to 'full review' before it could be forgiven, as the Trump administration scrambled to address mounting criticism of a new program that some big companies and even the Los Angeles Lakers used to obtain taxpayer-backed loans.

“Amid an outcry about large companies receiving the loans, the Lakers repaid the $4.6 million government-backed loan it took out. Mnuchin said in an interview on CNBC that it was 'outrageous' the NBA franchise had obtained the money in the first place. It’s unclear if other professional sports teams received similar loans. The organizations aren’t required to disclose it, and the government has not provided any records.”