St. Louis County Police Offers Class On How to "WIN WITH MEDIA" After Police Shootings 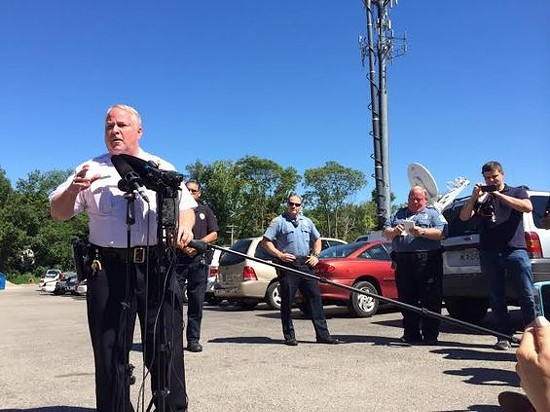 Lindsay Toler
Ferguson police chief Tom Jackson has bumbled his way through plenty of press conferences -- would a class help?

For police, Ferguson presents what's known as a "teaching moment."

Surely, there are lessons to be learned. But where to start? Perhaps a case study of the opaque investigation into the killing of an unarmed black teenager? Crowd control measures that don't deepen tensions between residents and law enforcement? A Ferguson-focused course on community policing?

Nah -- According to a recently posted (and utterly tone deaf) flier for a "continuing education" course from the St. Louis County Municipal Police Academy, officers will be able to enroll this October in a course titled "OFFICER-INVOLVED SHOOTING -- YOU CAN WIN WITH THE MEDIA." Taught by a former broadcast journalist, the flier promises a "highly entertaining" three hour romp through such subjects as "Managing Media Assault and Battery," "Feeding the Animals" and "'No comment' is a comment."

"You will learn a lot, and you'll have fun doing it!" the flier says.

OFFICER-INVOLVED SHOOTING -- YOU CAN WIN WITH THE MEDIA

First spotted by activist Shaun King on Saturday, the flier is directed at "All upper-echelon law enforcement professionals" who would benefit from learning how to spin, er, "WIN" against an adversarial media whose coverage makes police officers look bad.

The weirdly upbeat wording of the flier appears to have been mostly lifted from older advertisements for the same class. Daily RFT spotted a significant amount of internet ire directed at phrases like "Meet the 900-Pound Gorilla" or the aforementioned bullet point about "Feeding the Animals," lines that sound similar to the racially-loaded slurs thrown at protesters and African Americans in Ferguson.

While insensitive given the context, both those lines refer specifically to media. The course's instructor, a former Chicago TV anchor named Rick Rosenthal, has been giving similar seminars to law enforcement for more than a decade.

Back in 1999, Rosenthal was the subject of a Chicago Tribune article that included criticism of his lessons on dealing with "Media Brutality," which appeared to foster officers' worst fears about the media while recommending they not talk to reporters after police involved shootings.

"I don't portray everyone in the media as a bad player," said Rosenthal in the Tribune story. "I teach law enforcement to be alert and not paranoid...Just as someone pulls a gun on you, you don't just stand there and let them shoot you."

On the other hand, a write-up of Rosenthal's presentation at a 2013 training conference demonstrates a far less antagonistic approach to media relations following a police involved shooting, one that encourages transparency and accessibility as a way of controlling media reports and narrative.

For instance, here's what he says about spinning the media after an officer involved shooting:

"To win with the media, you have to give it to them straight," Rosenthal says. "The minute you get imaginative and try to spin the facts or speculate about elements that are unknown, you have chosen to be stupid, because that kind of creativity will ultimately trip you up.

"If the facts of a shooting are not fully known, say so. Stress that your agency always takes these matters very seriously and that a thorough investigation is underway to determine what did or did not happen. Promise that to the extent possible, you will keep the media and the public fully informed every step of the way. And in turn, ask that the media not speculate on or judge what transpired, pending confirmation of the full picture.

Regardless of Rosenthal's cynical-sounding approach to media relations, the St. Louis County police academy has other options for officers looking to expand their knowledge-base post-Ferguson. These include classes on conflict resolution, patrol and investigative report writing, and crisis intervention training.

Without a doubt, those are areas we'd all like the police to "WIN" at more often.

Update 3:30 p.m.: Rosenthal released a statement to the St. Louis Post-Dispatch regarding the wording on the flier, which he wrote. He takes issue with those who were offended by his phrasing.

"The term 'feeding the animals' is a tongue-in-cheek reference to dealing with mainstream news media reporters (the 'animals' - I used to be one, myself.) The term '900 pound gorilla' is a similar tongue-in-cheek reference to news reporters, particularly those who aggressively strain the bounds of First Amendment privilege while ignoring their responsibilities for fairness and accuracy, especially as defined by the Society of Professional Journalists Code of Ethics. I have been using these terms in my programs for the past 20 years. I strongly reject any suggestion that these terms are new, or are in any way a specific reference to the recent tragic events in Ferguson, Missouri, or are in any way a racial slur. Any suggestion to the contrary is just plain wrong."

"Chief of Police Jon Belmar and his command staff were unaware of the flier and its wording until the subject was brought up by several members of the media. The St. Louis County Police Department recognizes the sensitive nature of this flier in the wake of Mr. Brown's death, and the events that transpired in Ferguson. This flier has been worded in nearly the same manner for all of Mr. Rosenthal's prior teachings at our academy, with the exception of the newly added lines referencing Ferguson. Being that the flier was sent by our police academy, we apologize for anyone hurt by the wording of the flier. We believe Mr. Rosenthal's use of the terms '900-pound gorilla' and 'feeding the animals' were mentioning police departments from across the nation dealing with the media and meant no racial harm."