Philip Patterson was in just the right place to grab this amazing photo of St. Louis 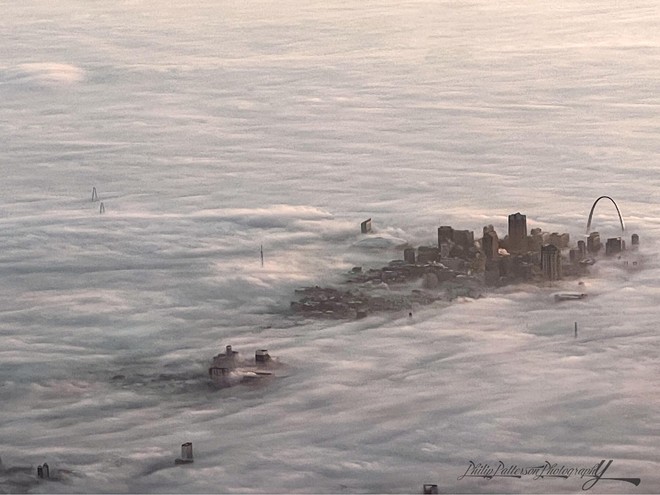 Philip Patterson
St. Louis from above on Saturday morning

Taking a picture of the Arch when returning to St. Louis after a trip is almost as much of a local tradition as telling jokes on Halloween.

Philip Patterson took that tradition to new heights over the weekend.

Dense fog blanketed St. Louis on Saturday as Patterson's plane flew over the city — so much so that Patterson's flight had to divert to Kansas City to wait for the fog to lift.

But in the meantime, Patterson, who dabbles in photography as a hobby, snapped the most otherworldly pic of St. Louis on his phone.

It's a view of St. Louis as most have never seen it before. Patterson's picture shows only the city's tallest buildings peeping through Saturday's fog, as if the city ascended into a sea of clouds.

It's a really unique shot — as Patterson tells the RFT in a message, a "right place, right time" kind of shot. It's not often a photo of St. Louis' rarely-changing skyline makes us stop and stare at the beauty of our city. This one did.

Patterson returned home from a trip to Tampa on Saturday morning and shared his picture on Facebook. "Fog was thiiiick," Patterson wrote. People marveling at the sight quickly shared it more than 100 times, with numerous other shares (credited and un-) across social media.