The controversial business manager of the St. Louis Police Officers Association has been on paid leave since September 14 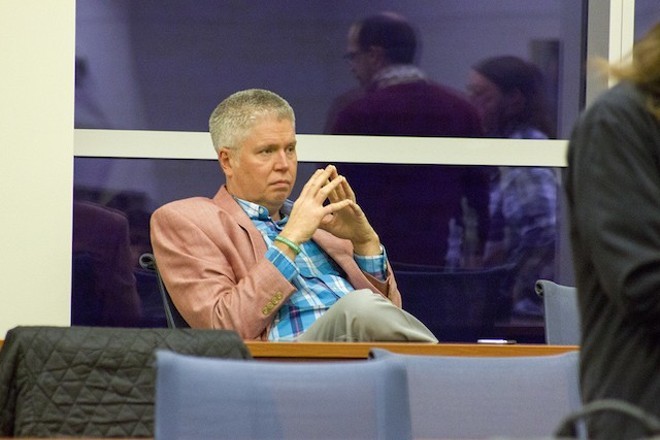 Jeff Roorda has been let go from the police union he has long represented — with the president of the St. Louis Police Officers Association asking the city to remove him "from all bargaining related emails moving forward."

Jay Schroeder, president of the association, made the request to a city secretary, who then relayed it to Director of Operations Nancy Cross and other city officials on September 19, according to an email obtained by the RFT.

Reached by the RFT this afternoon, Roorda confirmed the news, saying he'd been put on paid leave on September 14 and that his last day on the union's payroll would be September 30.

In a statement, Roorda suggested his employment had been terminated in order to appease St. Louis Mayor Tishaura Jones.

"The current president seems to believe that parting ways with me will curry favor in the form of police raises with an anti-police Mayor who has demanded my ouster in retaliation for my tireless advocacy for our officers," he wrote. "What comes of this gesture of appeasement remains to be seen.

"As for me, I have no regrets. I'm proud that I stood-up for cops at a time when a false and divisive narrative threatened the future of the profession and the safety of our region. For that, I offer no apologies."

Earlier this year, the union let its contract with Roorda expire, but at the time, Roorda told the Post-Dispatch it was simply a formality since he was running for state Senate — suggesting they didn't want to lock into a contract in case he won the election and no longer had time to do the job. Indeed, Roorda continued to write a column in the SLPOA newsletter, with his byline listing his longtime title of business manager, through the most recent issue in August.

Roorda has been business manager of the police union for more than 11 years, despite not living in the city and despite getting fired from his job as an Arnold cop more than two decades ago. He's offered unflinching support for police in sometimes incendiary ways, including tweeting "Happy Alive Day, Darren!" to Ferguson officer Darren Wilson on the fifth anniversary of Michael Brown's death and claiming then-President Barack Obama had blood on his hands after a sniper killed Dallas Police officers at a 2016 Black Lives Matter rally.

Mayor Jones was one of many locals who pushed back on his comments. She tweeted last March, "If the SLPOA wants a seat at my table, they’ll get rid of Jeff Roorda."

In his statement, Roorda tied his ouster from his longtime post to the union elections that took place from September 1 to 15.

The union's president, Jay Schroeder, was not one of the union officers up for election in recent weeks. But, Roorda wrote, "The Police Association is deeply divided right now. Apprehension about the leadership of the current president led this month to contentious elections for several positions on the organization's board. The Association is truly at a crossroads right now."
Editor's note: A previous version of this story referred incorrectly to the shooter who killed police officers in Dallas in 2016. The perpetrator was a lone gunman. We regret the error.