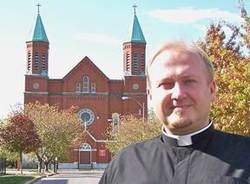 stanislauskostka.com
St. Stanislaus' pastor, Marek Bozek, outside the church.
Okay. I have no idea about Judge Bryan Hettenbach's sexual orientation. I presume the St. Louis Circuit Court judge is heterosexual. Why? Because -- thus far -- the St. Louis archdiocese has made no mention of his sexuality in its long-running legal feud with St. Stanislaus Kostka Church.

The same cannot be said of an appellate judge who was supposed to hear an appeal to the lawsuit between the archdiocese and St. Stanislaus last year but was later asked to step down when the archdiocese questioned the gay judge's ability to fairly rule on the case.

But I digress. The real news today is that the two-year-old lawsuit against St. Stanislaus is finally coming to an end. The trial -- expected to last three weeks -- begins today.

At stake are the financial assets of St. Stanislaus. The traditionally Polish parish north of downtown has been allowed to control its own finances for over a hundred years. The archdiocese, meanwhile, contends that it should control St. Stanislaus assets (estimated a few years ago at $8 million) as it does with all other parishes in the region.