The Enduring Mystery of the USS Inaugural and Its Missing Guns 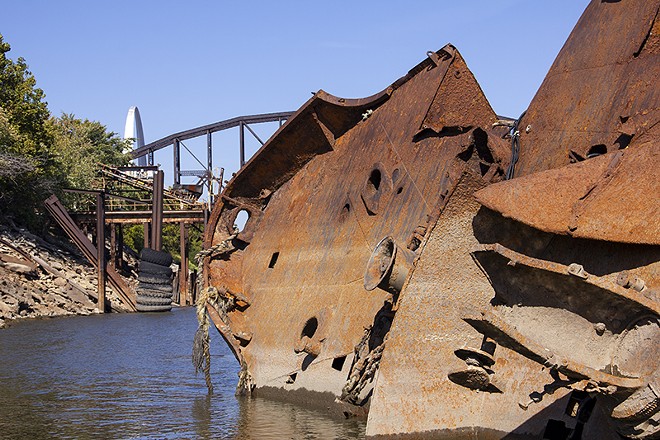 “We worked there for three or four weeks, and then the water came up,” recalls Fleshman, owner of Fleshman and Son Excavators. “We were never able to get back to it.”

Yet, with the help of the Mississippi, the Inaugural keeps coming back, if only for brief visits: The sunken vessel has reappeared several times over the decades, and it happened again last week, when the water level fell below four feet and exposed the ship to the elements — generating fresh interest in the St. Louis oddity.

An admiral-class minesweeper, the Inaugural served in Okinawa and survived combat with kamikaze pilots; after it was decommissioned, the vessel was brought to St. Louis in 1968 as a floating museum.

However, for the past 28 years, it has sat on the bottom of the Mississippi, about a mile south of the Poplar Street Bridge, rusting in the muddy waters which tore it from its moorings near the Gateway Arch during St. Louis’ Great Flood of 1993.

While its location is listed on Google Maps, the spot may not be easily accessible depending on the status of the flood wall door near Rutger Street. On a sunny weekday, Riverfront Times journeyed to the remains of the once-heavily armed, heavily armored minesweeper; after some searching, this reporter was able to find a rough path through the foliage to a spot near a sandbar and several large barges, the ship’s final resting place.

Today, the 184-foot-long, 530-ton minesweeper looks like it was hit by an explosion of rust, which colors the top of the ship a deep, red-tinged ochre. The lower sections have become nearly white with their time beneath the surface.

Parts of the hull show signs of salvage work, but Fleshman and his crews aren’t the only ones to have cut away at the Inaugural: In its heyday, the vessel bristled with weapons, including a twin .50-caliber anti-aircraft gun on the bow that wowed generations of visitors during the ship’s time as a St. Louis tourist attraction.

At some point after the ship’s sinking, the guns disappeared.

“There were no guns on it when we worked on it,” Fleshman recalls of the 2012 salvage efforts. “But,” he adds, “I have seen one of the guns — at Cementland.”

Indeed, the fate of the Inaugural’s missing guns is tied to the legacy of Cementland and City Museum creator Bob Cassilly, who spent years on an ambitious project to turn a 54-acre cement factory north of St. Louis into a landscape of towers and repurposed industry.

It was John Patzius, as associate and friend of Cassilly’s who worked on the Cementland project, who brought the Inaugural’s armament to the site — but attempting to trace the gun's journey reveals a twisting affair, as its exact provenance is shrouded by the competing claims offered by the people who previously possessed it: In a 2007 interview with then-RFT staff writer Chad Garrison, an unapologetic Patzius said he had used a van to smash through the doors of a warehouse where the gun was being stored and “hooked the gun up to my rig and drove off.”

Before that, the gun had been held by a local Navy veteran hoping to restore the armament and donate it to the St. Louis’ Soldier Memorial; before him, the gun had spent time fixed to the bow of a tugboat operated by the river salvager who was first hired to raise the Inaugural after its sinking in 1993.

Cassilly himself said the Inaugural's gun belonged to him, telling the RFT’s Garrison, “All I know is that possession is nine-tenths of the law, and that gun is on my property."

DANNY WICENTOWSKI
Salvage crews cut away a relatively small portion of the Inaugural's 530 tons in 2012.

In an interview last week, Patzius, now 84, says he believes the anti-aircraft gun was donated to a museum; however, representatives from City Museum, the Museum of Transportation and Jefferson Barracks tell the RFT they have no records of the gun in their collections.

It’s not clear if the guns are still on the Cementland site or if they were later moved. After Cassilly’s tragic death in 2011, Cementland closed. The site suffered a substantial warehouse fire in 2016 that halted efforts to continue the project.

But Patzius still has dreams of raising the Inaugural. He bought the salvage rights and title to the boat after its 1993 sinking, but the 2012 salvage operation with Fleshman was the last time the boat was sufficiently exposed by the low river to do the job. Patzius blames delays on the Port Authority, and says he’s committed to finishing the work of salvaging the old minesweeper — but it all depends on the river.

“I would still finish it if they would let me go to it,” Patzius says. “But see, two weeks from now, the thing might be underwater. And then you’re fucked again.”

There’s so much more to the Inaugural’s story. For more on the ship’s unique journey from World War 2 combat to St. Louis tourist attraction, and the conspiracy-laden circumstances of its sinking — replete with theories of intentional sabotage, insurance payouts and arson — make sure to read the definitive chronicle by Garrison. It is a strange, strange tale all its own.

DANNY WICENTOWSKI
The Inaugural tipped as it sank, coming to rest on its side.