So the Cardinals got their man after all.
click to enlarge 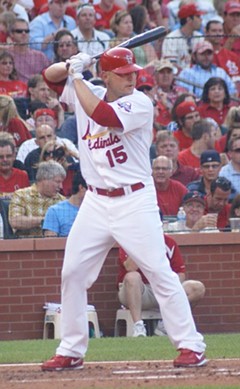 I have to admit, I wasn't all that optimistic the Cards would be able to get a deal done with Matt Holliday, up until just the past couple weeks or so. The money, the years, the Boras Factor, all of it just seemed to me to be fighting against the Lego Man staying even one more season in the Gateway City.
Then, of course, not too long ago, I was forced to change my tune. Right around the time every other single team who would have or should have had interest in Holliday completely dropped out of the running, in other words. Suddenly, there didn't seem to be any teams all that interested in talking to Holliday or Boras, Bat of Gold and Balls of Iron or not.
My initial thoughts on the deal are as follows: the money is just fine, but the years are just too damned many. A $17 million average annual value is right in line with what a player of Holliday's calibre should be getting, at least at this stage of his career. Hell, it might even be a little bit on the low side for a player with his level of production. The problem, of course, is that by the time this contract is over, Matt Holliday is going to be 36 years old. Holliday at 30? Definitely worth 17 mil. Holliday at 36? Time will tell, but let's just say it isn't a particularly safe bet to take.
And, of course, there's also the spectre of backloading to be considered. Until the exact details of the contract are released we don't really know, of course, but the way the deal is structured will certainly affect just how good or how bad a deal it becomes down the road somewhere as well. If the Cardinals are paying Holliday exactly $17 million every year of the contract, that's one thing, but I honestly don't recall the last time a contract of this magnitude had a constant salary all the way through. A more likely scenario is the contract is backloaded, meaning the Cardinals may not, in fact, be paying Matt Holliday $17 million a year for his waning years, but more like $21 or $22 million.
In the end, I can't really be disappointed in the signing. The Cardinals signed the best player on the free agent market, and must now be considered very strong favourites to repeat as NL Central champs in 2010. Still, I hope in a couple years we can all still look around and laugh at the Cubs and the ridiculous contract they gave their All-Star left fielder.