The Pool Repairman and the Hollywood Hustle

Jay Hutchinson dreamed of telling the story of his late son's life. Then he met Stephen Martines

Jay Hutchinson dreamt of honoring his son's life with a book. MONICA MILEUR 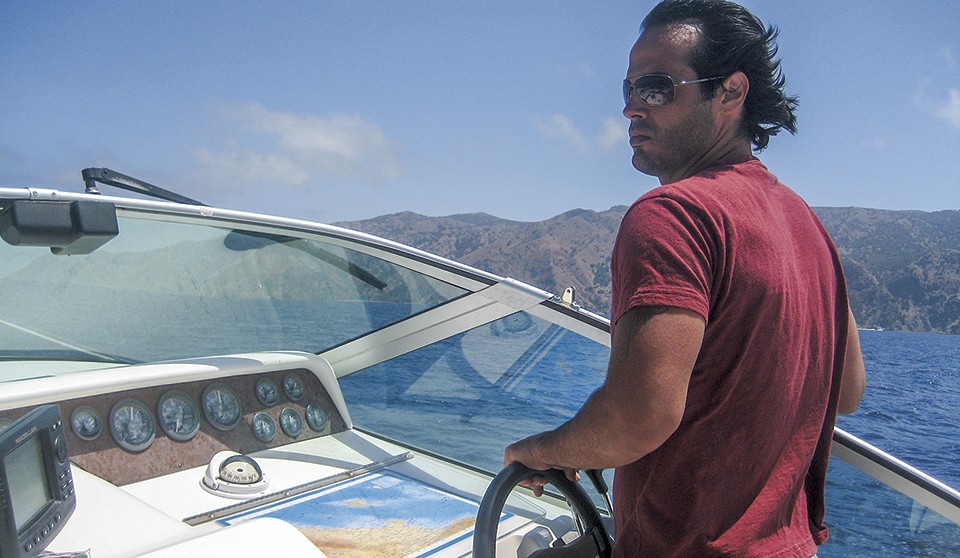 Martines signed a contract with Hutchinson, but then didn't come through on the meetings promised.

"Sorry for the delay," Martines wrote on March 3, 2015, more than a month after the due date he and Hutchinson had agreed upon for Taylor Lake's first edit. "Yes I have been incredibly busy ... I have spent quite a bit gathering the team for this project and development."

In November 2014, Hutchinson had sold his Mustang, paid Martines the $15,000 and signed the contract. Martines and his team were supposed to pump out the novel version of Taylor Lake, to be released in May. Hutchinson, per Martines' request, had been working on a screenplay version for the film, to be produced afterward.

But shortly after the money was passed, Martines had asked him to solicit a wealthy friend for a $100,000 investment in the film, and Hutchinson had declined. They never met face to face again, with Martines always promising and then postponing meetings, Hutchinson says. The weekly updates stipulated in the contract hadn't come. And around Christmas, Martines cryptically emailed to ask about a high-interest, short-term loan to help with a "personal tax mess."

Hutchinson, who still had never met or spoken with anyone on Martines' team, including the book's alleged editor, finally sent Martines an email on February 3, asking for an update. "Dude, you got something here!" Martines wrote back, a week later, in reference to the edits. "A little more experience and you could be a real writer! Let's chat over the weekend. Congrats on your first pass ... Long road of work together!!:)"

Hutchinson was losing his nerve. He'd been mired in depression since his son died, and in his passion for the novel's production, he wondered if he was overreacting. After all, he was a pool repairman. From what little he knew, in Hollywood, projects were postponed all the time, and deadlines were rarely hit. Still, it had been two months; he himself had found time to condense the novel into a screenplay. He checked DTE Films' IMDb page, and sure enough, Taylor Lake was listed as "In Development." Martines assured him that Claire Miller, whoever she was, was moving forward with the manuscript edit.

A week later, on February 17, Hutchinson cracked. He sent Martines a frantic email:

Please return [the $15,000] within the next 14 days. PLEASE MR. MARTINES!. Your unprofessionalism and inability to keep your word has caused GREAT STRESS to MYSELF as I am convinced you have taken advantage of a grieving father that lost his son, trying to find peace for himself. You mentioned my son Taylor numerous times to convince me to sign your contract, this is NO RESPECT to TAYLOR or MYSELF. I NEED to go in a direction AWAY from someone that refuses to keep their word.

Your book is almost finished. People have personal lives outside of work, Hutch. And circumstances that cannot be controlled. That being said, you go back and forth so much because you don't trust any one.. And don't use the words "taking advantage of a grieving father who lost his son". It's a not close to the truth and you know it.

I will call you later.

Four days later, Hutchinson received another email. It was the first seventeen pages of edited manuscript, "so you know progress IS being made." Hutchinson and his girlfriend opened the document together. They looked at it, then at each other, and laughed bitterly. There were five editing errors in the first three sentences.

Hutchinson's girlfriend wrote Martines, begging for a refund agreement, claiming she had to make upwards of twenty grammatical corrections on those seventeen pages of "edits."(In RFT's review of the pages, this is a conservative estimate.)

Martines deflected, repeatedly insisting that he wanted to get Hutchinson help. "His demons are his own and stem from a past he has never dealt with" he wrote. "All we can do is, help him. Let's be honest... Money isn't going to solve the issues. And we are fools to think otherwise."

Finally, Hutchinson had a lawyer send a demand letter to Martines and Jacques Hebert, who is listed on paperwork as DTE Films' sole officer and whom Martines had repeatedly referenced as being excited about the project. In it, Hutchinson's lawyer accused them of breach of contract and fraud.

Hebert responded by letter. But rather than refunding the money, he claimed that Martines had no authorization to enter DTE Films into any agreements: "As the sole officer of the DTE Films Corporation I, had no knowledge of this contract and/or Mr. Martines & Wildhorse Productions, LLC dealings or its projects. Therefore, I would like to go on record by stating that the document created between Stephen Martines and Mr. Hutchinson for a Wildhorse Productions, LLC / DTE Films Corporation project, is not a legal document." (Hebert did not respond to multiple requests for comment.)

Hutchinson, desperate, sent Martines a series of repetitious emails, accusing him of having conned him. Feeling trapped, he reached out to Martines' business contacts and family, pleading for information.

Martines cracked, declaring Hutchinson "psychotic," a "lunatic," a "pansy," and "pathetic," accusing him of having blown up the deal with his paranoia. He threatened to sue Hutchinson for harassment and slander. "Irony is," Martines wrote on May 18, "you don't even know who's lying to you or not. Or anything for that matter... Quite comical actually."

Hutchinson's lawyer discovered that Wildhorse Productions, the company charged with producing the Taylor Lake novel, had been suspended by the state of California, and that DTE Films had lost its corporate status for failure to pay taxes. He found out that Martines' liens backed up for miles. Hutchinson tried to sue Martines, but all he could find was PO box after PO box. Martines had never let him know where he lived. That has been a key problem for many who want to pursue a legal claim against Martines; without a fixed address, it proves exhausting, nearly impossible, to track him down. And even with an address, a judgment means nothing; absent assets to seize, the person holding the judgment is holding just that: a piece of paper.

At last, a year later, an email came from one of the many people Hutchinson had reached out to in frustration: Miller, the woman he'd been told would be Taylor Lake's editor. "Just so you know, I did take a look at your manuscript and offered ideas as to things you can do to overhaul it and make it a more reader friendly manuscript, but that was it," she wrote. "I was never offered and never received any compensation and I handed the manuscript back to Stephen after having it a few months ... I do not want my name involved in this situation, because truly, I am not involved in it and do not wish to be." (In an email to the RFT, Miller declined comment.) 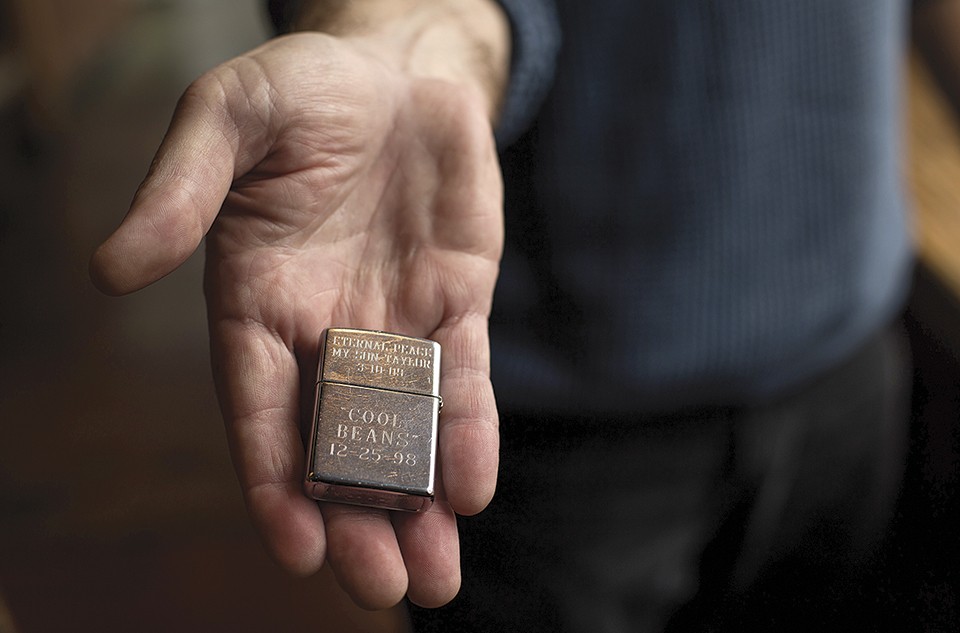 MONICA MILEUR
Hutchinson treasures mementoes from his son's life, including this Zippo lighter.

Martines originally agreed to meet with a reporter to discuss the allegations against him. But he postponed the face-to-face meeting at the last minute. On the phone, he is pleasant and conciliatory, reiterating his sympathy for Hutchinson's son's story.

When asked about Hutchinson's allegations, he dismisses them, assuring that there is no story here.

"I — we — as a whole, we did our best to uphold our end," Martines says. "But we were unable to continue both due to Jay's behavior and lack of interest." But he declines to offer evidence of anything done to uphold his — or their — end, anything he did to earn Hutchinson's $15,000. He will not discuss anything else on the record, including the numerous allegations against him from various women. He ends the interview shortly afterward. Later, in response to a detailed series of questions in writing, he responds tersely. "My apologies for the late response. My legal team will contact you and RFT."

Martines is apparently now trying to make it as a Nashville star. He's working on an album of pop country songs while coaching girls' soccer at the Lou Fusz Athletic youth club.

As for Hutchinson, once he became certain Martines had scammed him, he spiraled into a deeper depression. He stopped playing poker, stopped going out and wouldn't talk for days at a time. He fluctuated between angry and crying, straining his relationship with his girlfriend. He'd noticeably changed after Taylor had died, and the ripping away of Taylor Lake, his closure to his son's memory, anguished him further. That cloud is no longer quite so dark, but to this day, he still reposts his frantic message on Craigslist every couple of weeks, until someone — likely Martines — flags it. The manuscript, still unpublished, sits heavy in his home, its characters endlessly playing out the tragedy. In it, Jensen (the fictional Hutchinson) mourns the recent suicide of Dillon (the fictional Taylor):

He walks out of the mini mart near Manasota Beach carrying a large bag of ice and six bottles of Corona Extra. He follows the landmarks to the beach, down a road he has traveled many times before.

He's only about a hundred yards away from the isolation he needs, but he stops to sit in the sand. He opens a Corona, pulls a knife, a lime and a plastic bag from his backpack, and stares at the horizon. He must have witnessed dozens of sunsets from this beach over the years, some beautiful, a few awesome, others so stunning he has no words to describe their beauty. But this one doesn't register. He doesn't see the colors or the splendor. He doesn't feel the warmth. "What the fuck happened?" he says out loud, slicing the lime into six not-so-equal pieces. "How did it come to this?" He squeezes two of the lime wedges into his bottle and wraps the other pieces in the plastic bag. He stuffs the bag of limes and the knife into his shirt pocket, and gets up to walk further down the beach.

He adds two slices of lime to the next Corona and takes out a joint and the Zippo. He had the lighter engraved six years ago: COOL BEANS 12-25-98. Dillon was fifteen when he got it for him. The kid had begged for a Zippo for two years straight. Two years. Jensen lights the joint, inhales, and chugs half the beer before exhaling. Jensen had reasons for waiting to give Dillon the lighter. Didn't he? He wanted him to grow up first, to become a man. His eyes are suddenly heavy with tears. "I'm sorry, Dillon." He begins to cry. "I'm sorry, buddy. I fucked up. Not You."