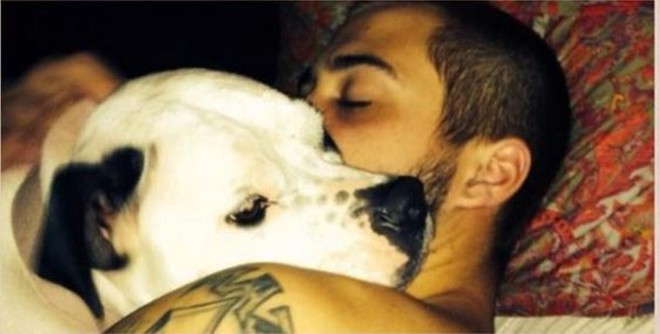 PHOTO VIA JUSTICE FOR KIYA
One of Angela Zorich's sons relaxing with Kiya the pit bull.

More than five years after a St. Louis County SWAT Team raided her home in order to conduct a property inspection related to a missed gas bill, Angela Zorich is walking away with a $750,000 settlement — and promises of change from the police department.

The settlement, reached earlier today, follows a lengthy civil case that finally went to trial in federal court last month. The settlement stands out — the exact financial figure is often kept confidential between the two parties, especially when one of those parties is a police department.

According to Dan Kolde, one of attorneys who represented Zorich, the settlement is among the largest ever reached in a case of a U.S. cop shooting a dog. And that should send a message to police departments not just around St. Louis, "but across the United States," he says.

"This happens a lot, this is a routine occurrence where police shoot a family dog," says Kolde, who specializes in cases involving animals. "We hope that St. Louis County takes a very hard look at its use of its tactical operations unit. Sending a SWAT team out for an unpaid gas bill, and a deck that maybe needs some repair, we consider to be overkill. Shooting someone's pet is not an acceptable response."

Granted, the SWAT raid was connected to more than a gas bill. As RFT first reported in 2015, the official police incident report indicated that members of the county SWAT team had been informed pre-raid that the two occupants of the home had "extensive violent history [sic] and were known to be armed and violent."

The raid took place in the early afternoon of April 29, 2014. Officers burst through the unlocked front door to Zorich's home in south St. Louis County, which a county property inspector had deemed an official nuisance after a previous visit. According to the police incident report, once inside the home, a member of the SWAT team spotted the family pet, a white pit bull named Kiya, "running full speed toward him and his team." The officer fired two two-round bursts from his rifle, killing Kiya.

"I was devastated," Zorich says now. "This has haunted me for over five years. It was an extremely violent raid."

But rather than overkill, deploying a SWAT team to serve a property inspection was standard practice for the department. That may lead to some changes: St. Louis county attorney Priscilla Gunn told St. Louis Post-Dispatch columnis Tony Messenger that the county is "making changes because of this incident," though what those changes are — beyond "more risk assessment" than currently performed for SWAT deployments — is unclear.

After the long legal fight, Zorich credits the settlement in part to Jim Crosby, a retired Florida cop and expert witness who testified that, based on his analysis, Kiya had in fact been shot in the side or back. (At trial, additional evidence contradicted the police narrative: Kolde tells RFT that they recovered a photo of Kiya showing exit wounds that couldn't be made if the pet was in a forward change.)

Without Crosby, Zorich believes her case would have been lost at trial.

"Now," she says, "we know that my Kiya was shot in the back, trying to run away from them."

Asked about the significance of the settlement, Zorich answers, "Money is great, but to see positive changes occur in St. Louis County, I definitely want that to be a part of it too."