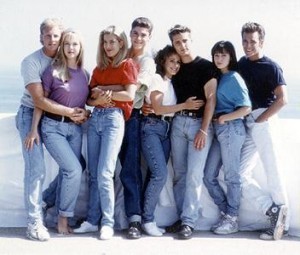 What in the name of Ian Ziering's mullet were we smoking?

When a wise man concluded that there's nothing new under the sun, he had to have been mulling American fashion. We've been recycling the same trends, give or take an accessory or two, for nearly 70 years. Hence the all-too-predictable 1980s revival: Madonna's Desperately Seeking Susan look has become so ubiquitous, her daughter's selling it at Macy's! To tweens!

Clearly, that look has jumped the proverbial shark. Which begs a question that will terrify anyone who went to high school in the 1990s. Namely, they're not going to recycle 90s fashion next, are they?

It's become sadly apparent in retrospect: We children of the 90s were clueless! Why did we think it was sexy to layer our socks? Why did we insist on useless little pockets on our T-shirts? And why, oh why, did we ever take style cues from MC Hammer?

Our list of the Top Ten WTF?!?! moments in 90s fashion, after the jump.

10. XXXXXL Everything
We wouldn't be caught dead in our concert T-shirts from the 90s, because even though Nirvana hasn't aged badly, the sizing on our "Smells Like Teen Spirit" tee has -- it's huge. For whatever reason, everything we wore during this era was five sizes too big: Tees, sweatshirts, flannel shirts, and even shorts were all jumbo. (Inexplicably, we usually made the big look even better by layering our sweaters and sweatshirts over a big white turtleneck -- sexy!)

The upshot? Our mothers may brag about fitting into the same dresses they wore in high school; not us. Even though we've gained 20 pounds since then, our clothes from the time are still way too big.

A side note: Anthropologists someday will surely ponder why it became the height of fashion in the early 90s to sport giant sweatshirts emblazoned with the initials B U M. They might also wonder why we loved clothing with the initials I O U. There are no appropriate answers.

Nothing, clearly, says "stylish" like a pair of fresh-off-the-farm overalls -- with one strap unhooked for a Vanilla Ice-inspired "street" edge. Also inexplicably popular: overall shorts. 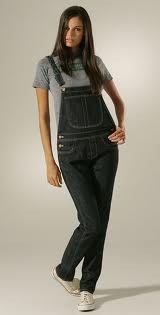 8. Cuffs and pegs and Keds, oh my!
After the sexy skinny jeans of the 80s, and before the flattering dark bootcuts of the late 90s, came the single least flattering blue jean style ever: mid-rise, baggy, in a lightish color, with the bottoms tightly rolled to show off a pair of slouchy socks (or two) -- and dazzlingly white Keds sneakers. Even the girls of Beverly Hills, 90120, had a hard time pulling off this bunchy look. And if it made Tori Spelling look fat, you know the rest of us were in trouble.

For the record, cuffing wasn't just for jeans. We also rolled up the bottoms of our jean shorts -- because, of course, they were large enough for the average elephant. (See #10.)

7. Broomstick skirts
Ankle-length skirts! In wrinkled, crinkled cotton! In retrospect, we feel like freaks for wearing these, but a casual glance at 90s TV shows that even New Yorkers like Elaine on Seinfeld sported broomstick skirts -- and not in any intentionally humorous ruffled-Pirate-shirt way. 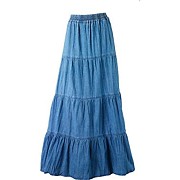 The weird part (well, the whole thing was weird, but bear with us): These skirts took their name from their drying method. You're supposed to wrap them, while soaking wet, around a broom handle.

We'll acknowledge that this isn't quite as weird as applique-ing a poodle onto your skirt. But it's definitely close.

6. Umbros
For four years of college, we pretty much lived in Umbros, T-shirts, scrunchy white socks, and Birkenstocks. The soccer short/sandal combination was tops: The Umbros said you were headed to the gym, but the Birks suggested that you'd given in and decided to drink cheap beer instead.

Which, of course, was usually the case.

5. Scrunchies
The key to any really cute 90s outfit: a cloth-colored ponytail holder in EXACTLY the same hue as your sweater. 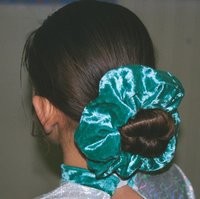 By the time Sex and the City aired its famous scrunchie episode in 2003, these hair accessories were passe even in the hinterlands. (Surely you remember Carrie taking down Berger's novel by explaining that if he really understood women, he would not have depicted a New Yorker wearing a scrunchie!)

But in 1993, you didn't just buy scrunchies in every color of the rainbow. You actually bought scrunchies in red-and-green plaid for Christmas. And scrunchies with little friendly ghosts for Halloween.

And while you may not want to admit this, we bet you a crushed-velvet scrunchie that one of your friends actually bought a scrunchie to go with her prom dress.

4. The body suit
For some reason, right around 1992ish, all the popular girls started wearing bodysuits, a.k.a. tight-fitting shirts that SNAPPED AT THE CROTCH. God only knows why: It took ten minutes to get out of the bodysuit any time you had to pee. It also rubbed very uncomfortably, as you might imagine considering there were SNAPS AT THE CROTCH. But still, any girl who had boobs wore them pretty much wore them nonstop until the whole low-rise/exposed belly came "in" -- and then suddenly you had to show off your thong, not your crotch-snapping leotard. Which is another WTF entirely.

3. Starter jackets
Preferably worn in size XXXXL (see #10), and preferably in the loudest colors you could possibly imagine, Starter jackets were the coat of choice in the early 90s. Everybody was wearing them, and everybody looked ridiculous.

People who remember the 90s as a sea of stylishly moody "My So-Called Life" flannel have clearly managed to block out all memory of this unflattering trend. 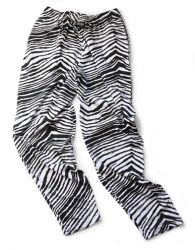 Zebra prints look great on zebras, and only zebras. Yet people wore these (see the ridiculous image to the left. Yes, those are pants, marketed to grown men).

A note to any lucky and stylish readers born after 1990: We swear we're not making this up.

1. Hypercolor T-shirts
Why would anyone think it's a good idea to buy a T-shirt that changes color when its wearer gets hot -- or wet? Sure, Brandon Walsh famously sported one (thanks again, 90210!), but for some reason our lingering memory of these tees is the sweaty dork whose Hypercolor-induced changes were located suspiciously close to his armpits.

We ask this question for one last time: What were we thinking?

Finally, one ray of hope: The New York Times noted last week that, while decades usually make a return in 20 year cycles, for some reason, it's 1970 that suddenly seems appropriate musically, not the more expected 1990.

For this, we can only get down on our knees and thank God: If we're listening to Led Zeppelin and the Sex Pistols, we can't possibly be expected to wear Zubaz and Keds.

While we're at it, we'll surely pray that reason will prevail for at least another decade -- meaning that by the time the 90s are back, we'll be way too old to care.