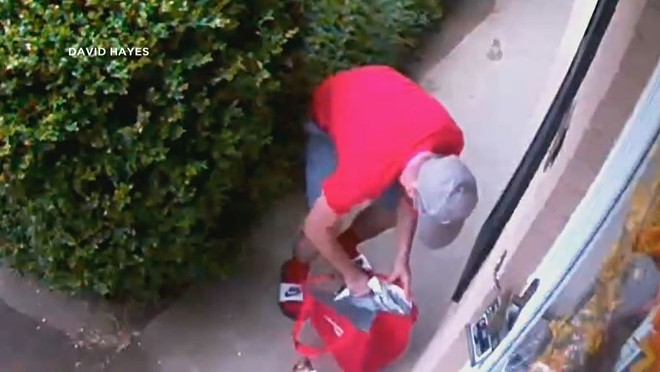 SCREENSHOT VIA KMOV
Security footage shows a porch pirate as he puts a white Amazon package into a DoorDash bag.

A thief's scheme to use a DoorDash bag and a takeout order from St. Louis Bread Company as cover for stealing packages from a St. Louis County home has left the restaurant, company and victim in confusion.

KMOV got the scoop on the story — including footage on the enterprising porch pirate's activities earlier this week. Reporter Emma Hogg interviewed homeowner David Hayes, who described how, on June 8, he had received notification that an Amazon package had been delivered.

But later that day, Hayes found no Amazon package at his front door. Instead, there was a brown paper bag of Bread Co. takeout food that he hadn't ordered.

Hayes checked his security footage. It showed a man in a gray baseball cap, red t-shirt and sandals approaching the door with what appears to be an insulated red bag with DoorDash branding. The man removes the paper bag of Bread Co. food, and then, in nearly the same motion, uses the same hand to grab the Amazon package — containing a shirt for Hayes' daughter — and securing it in the bag.

The entire "delivery," from the quick-handed swap to walking away, elapsed in less than five seconds. Hayes believes it shows that the thief has done this before, telling Hogg, "It seemed pretty deceitful and well-thought-out."

But things get weirder. Based on the receipt, Saint Louis Bread Company told Hayes that the order had been reported missing earlier that day, but that it had not been ordered through the DoorDash app.

Meanwhile, KMOV reports that it reached out to DoorDash: "They are still investigating if the driver even works for them."

The thief may have gotten away with the package, but the moving parts of his plan leave much to ponder: If he is, in fact, a current or former DoorDash employee, why involve an actual food order from that same day with its original receipt, a clear paper trail that St. Louis County Police — who told KMOV they are investigating the theft — will likely note with interest.

There's also the matter of how a "missing" food order winds up in a petty criminal's reproduction of that scene from Raiders of the Lost Ark but instead of a golden idol it's an Amazon package and the bag of sand is Bread Company.

In the interview, Hayes suggests that "it made sense" that someone would use the food as a "decoy" to steal packages, but that doesn't explain whether the decoy was obtained by yet another theft or some other unknown subterfuge.

It's a mystery wrapped in an enigma — still, as far as criminal calling cards go, you could do a lot worse than leaving your victim with a meal.