Wanna Rent the A-B Clydesdales For the Day? It's Gonna Cost You 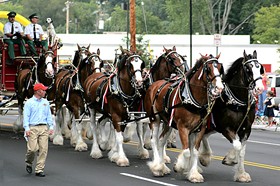 Image source
Got a spare two grand? Invite the Clydesdales to your birthday party!

Who doesn't love the Anheuser-Busch Clydesdales? Those four-legged symbols of hope and pride and a heritage of fine brewing are the best mascots in all beer advertising. Plus, their furry fetlocks make them look almost as sweet and non-threatening (though probably not as sexy) as a My Little Pony.

Until last week, A-B generously lent the horsies out to anybody who was willing to pay a modest feeding and stabling fee. That meant that any horse-mad seven-year-old girl with an ample supply of hay and indulgent parents could -- in theory -- have them at her birthday party and make all her friends totally jealous.

But now, alas, the parents will have to be really indulgent. In order to offset the increased cost of Clydesdale-care, the brewery has started charging $2,000 per appearance, the St. Louis Business Journal reports.

Each appearance by the Clydesdales costs the brewery $8,000, a spokesman told the Business Journal, so $2,000 is still sort of a bargain. A-B will continue to pay the full freight for appearances where an appearance by the Clydesdales is expected (and, presumably, their absence would cause the company a lot of grief), like today's Cardinals home opener, Fair St. Louis and the Webster Groves Fourth of July celebration.

A-B hopes the new fee will cut down on demand for the Clydesdales. The herd numbers 250 animals and they can only show themselves off so much.