Want to Propose at Busch Stadium? Here's How It Works (And How Much It Costs) 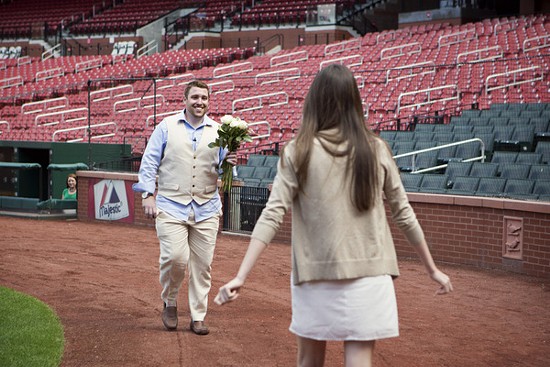 Switzerfilm
Now you know how much it cost him to do this.

Want to be sure your St. Louis sweetheart will accept your proposal of life-long love? Then where else to get down on one knee and break out the ring than baseball heaven itself, Busch Stadium.

About 30 couples get engaged on the St. Louis Cardinals' home turf every year. The Redbirds don't allow proposals during a game, so couples come in for private tours on off-days or before night games to have their special moment.

Proposing at Busch Stadium costs at least $250. That'll get you one hour in the stadium, complete with a private tour for a group fewer than twenty people plus parking. For an extra $250, the proposer can put a static message up on the scoreboard for his or her proposee. 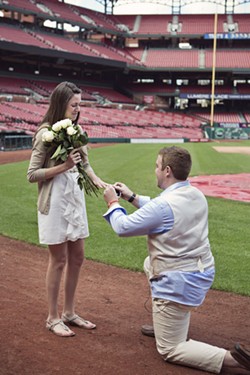 Switzerfilm
He puts a ring on it at Busch Stadium.

If you're looking to Kimye your fiancee-to-be by surprising him or her with family and friends during the proposal, that's another $100.

So in total, a tour of Busch Stadium that turns into a marriage proposal and ends with family and friends surprising the couple costs a total of $600.

That's not far off from the cost to propose at other MLB stadiums. Only two teams charge more for proposals: The Los Angeles Dodgers ask for $2,500 for a proposal featured live on the video board. The same thing at Nationals Park, home of the Washington Nationals, costs $1,500.

Lovebirds will find the most bang for their buck in Miami's Marlins Park, according to a cost analysis by Swimmingly, where $500 buys a video proposal, a PA announcement and a dozen roses delivered by Billy the Marlin, the team's mascot.