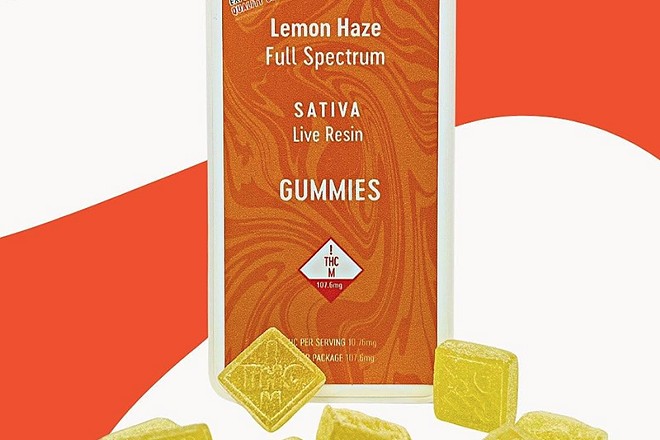 Cannabis marketing can often seem like a cloud of jargon, but seeing the phrase "live resin" is generally a good sign that your weed product is going to hit harder and smell weedier — and that's the case with Vivid's new line of cannabis gummies, which bring the live resin process to the world of Missouri edibles.

Vivid's co-founder, Boston Dickerson, says the new gummies represent several firsts for Missouri's medical cannabis market, including the first time an edible has been designed to be "strain specific" — right down to the smell and taste.

"As soon as they chop the plant down, instead of drying it and hanging it and curing it as normal, they flash freeze the stalks of the whole plant," Dickerson says, describing the process to produce live resin.

The result, he adds, creates "the closest thing to the actual plant, the wide range of flavors that you don't get from a normally cured product or distillate."

The use of live resin is most widely seen in the area of cannabis vape products; compared to cannabis concentrate distillate, a live resin vape cartridge tends to carry a stronger odor and a more powerful effect.

But in edibles, there's demand for products that taste like candy or fruit flavors, and cannabis chefs often pride themselves on creating gummies whose bright, sweet flavors are indistinguishable from high-end candy and confections.

That's not the case with Vivid's new live resin gummies. The first offering, marketed as a sativa lemon haze, carries a noticeably dank aroma. Biting into the chewy pectin gummy releases a rush of lemon flavor with a subdued but pointedly hashy aftertaste. Each gummy holds about 10 mg of THC.

Matching the flavor of a specific cannabis strain was no easy task. Corey Wilson, Vivid's head cannabis chef, notes that most edible products are made with distillate in order to maximize the THC content in what is essentially a flavorless, odorless substance.

"If you grab a handful of lemon haze buds, and you ground it up, or when you dry hit a joint and you can taste it — those are the things we're using as a guide," Wilson says.

Perfecting the lemon haze gummies has taken the better part of a year, but Wilson is already working on the next flavor, which will match the indica strain of purple chem — one of the most popular strains in Missouri.

"Purple chem is one of my favorite strains on the market," Wilson says. "There's going to be a heavier feel to it, and there's definitely going to more of a weed taste present."