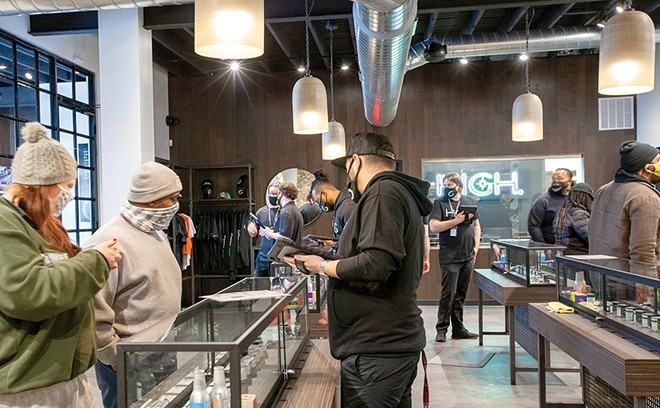 For the fourth month in a row, Missouri's medical marijuana industry has raked in more than $30 million dollars in cannabis sales, according to June numbers released by the Department of Health and Senior Services.

Missouri cannabis dispensaries did $30.94 million in sales last month, DHSS reports, bringing the total amount of money brought in by the industry to $393.09 million to date.

That's a serious chunk of change, to be sure. But there are signs that growth is beginning to level off. Since October 2020, when the first dispensaries in the state opened their doors, growth in retail sales of weed has been fairly steady, besting the previous month's numbers with nearly every new report. But with three months of similar sales numbers, it appears to have hit a plateau.

At the same time, June saw the number of new patient applications fall for the third consecutive month, adding only 2,611 new patients. But while new applications are trending downward, renewals are up significantly and have been climbing steadily. DHSS issued 7,338 renewals in June, compared to only 4,779 in February. As of the end of June, Missouri had 187,018 active, card-carrying patients.

Soon, though, those numbers could become much less significant in the grand scheme of things, with the potential legalization of recreational weed in the state serving as a major wild card. Legal Missouri 2022, the group that is leading the charge to get adult-use cannabis legalized in the state via a ballot initiative, submitted more than 390,000 signatures to the Secretary of State’s office in May — more than double the number required to get the measure on the ballot. Those signatures are still in the process of being verified.

Should that verification process shake out according to plan, there's a lot of optimism that voters will come down in favor of legalization. Recent polling conducted by SurveyUSA indicates that some 62 percent of Missouri voters are in favor of recreational weed. Of those surveyed, 71 percent of those aged 18 to 49 said they support legalization, while voters between the ages of 50 and 64 came in at 59 percent in favor. Only those over the age of 65 came in at less than half — 46 percent — in favor of legalization. But even still, only 35 percent of that group indicated that recreational cannabis should remain illegal, with 18 percent remaining undecided.

If recreational weed is legalized in the state, sales numbers for the industry are predicted to skyrocket. BDSA, a market research firm for whom the legal cannabis industry is its primary focus, projected $360 million in annual sales for Missouri in its 2022 Market Forecast — and with 2022's total so far just over $178 million, the industry is right on track to hit those numbers. But if adult-use recreational consumers are included in the picture, that number jumps to a whopping $650 million.

Time will tell, but that's a likelihood that's increasingly looking more like a "when" than an "if." In that case, today's sales ceiling is sure to be tomorrow's floor.