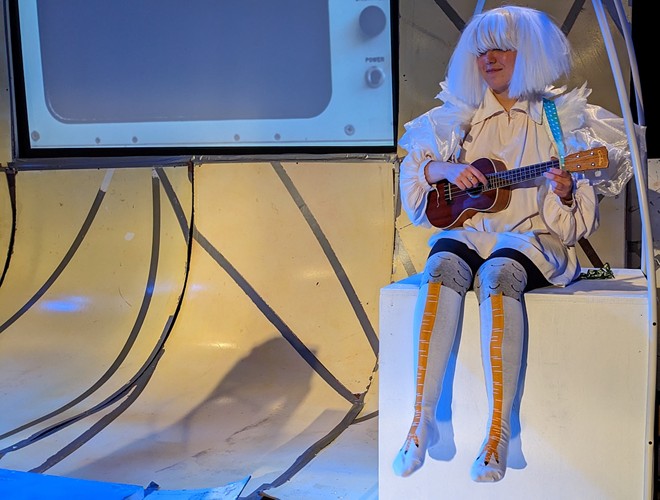 LaWanda Jackson is planning to sing "Amazing Grace" later this week as part of a new original show The Golden Record.

"When I was young, I always wanted to sing," Jackson says. "But I lost my confidence." She began tapping into that childhood passion again in 2009 when, while incarcerated, she joined the Prison Performing Arts program. Now, she is a member of the alumni program, which stages shows around St. Louis with people who have been released from prison.

Agnes Wilcox started the Prison Performing Arts Program in 1999. Across the state, she would stage productions with incarcerated individuals. This American Life once featured the program's staging of Hamlet at the Missouri Eastern Correctional Center.

"They let me know that you are smart, you are creative, you can do anything," she says. "They gave me room to grow. They let me be myself. It's been an amazing experience because they care. When someone really cares, everything in your life becomes fruitful."

Jackson has been in the alumni program since 2021, and The Golden Record will be her third production since. She also appeared in Kept Away and Elsinore, a prequel to Hamlet. In The Golden Record, Jackson will play Traveler Number 2.

"We are time travelers, carrying the last memories of the people who are gone," Jackson says. "And so it's our job is to keep their memories alive and not forget them, but in the midst of it, we've kind of forgotten ourselves."

The show is based on the actual golden phonograph records that Carl Sagan created and were launched into space on the Voyager in 1977. The records were a catalog of human sounds and images that would give alien life a sample of the best Earth had to offer.

The two travelers in the show are carrying their own records of stories, poems, scenes and memories. They're shepherding these things to a new destination, but the spacecraft is glitchy, and they aren't sure they'll make it. The show is dedicated to PPA alumni who have passed away, and theirs are some of the memories being performed.

"It's personal because of the people we lost," Jackson says.

Director Rachel Tibbetts says that the show grew out of writing prompts that the alumni were responding to. "We realized that we had something here," Tibbetts says, and she called in writer and theater artist Courtney Bailey to shape a throughline with the works. Bailey came up with The Golden Record idea, which would allow the show to tie together disparate stories, but it also allowed "transmissions" to come in via recorded video. This allowed PPA alumni who aren't in St. Louis to join the show.

Sound Designer Ellie Schwetye drew on the music and sounds that are on the actual golden phonograph records still hurtling through space, such as Chuck Berry's "Johnny B. Goode" or the "Night Chant" from the Navajo.

The show runs an hour, but Jackson says that a lot is packed into it. "It'll make you laugh; it'll make you cry," she says. There's even a giant chicken. "Filberta," Jackson says. "I think people are going to love her. She does it all."

The Golden Record is curated and adapted by Courtney Bailey. Directed by Rachel Tibbetts. Presented by Prison Performing Arts at The Chapel (6238 Alexander Drive) from Thursday, January 26, through Sunday, January 29. Showtimes are at 8 p.m. Thursday through Saturday, 2 p.m. Sunday. Tickets are $25.

Rosalind is the editor-in-chief of the Riverfront Times. She formerly worked for Washington University's alumni magazine and St. Louis Magazine. In 2018, she was selected as a Rising Leader of Color by the Theatre Communications Group. In 2014, she was selected as an Emerging Leader by FOCUS St. Louis. Her work...
Read More about Rosalind Early
Scroll to read more Arts Stories & Interviews articles (1)