A Streetcar Named Desire Triumphs at the Tennessee Williams Festival

Written by Tennessee Williams. Directed by Tim Ocel. Starring Sophia Brown, Nick Narcisi and Lana Dvorak. Presented by the Tennessee Williams Festival St. Louis through May 19 at the Grandel Theater (3610 Grandel Square; www.twstl.org). Tickets are $25 to $45.

“Stella!!!!” By now it’s a joke, it’s a cliché, and it’s a reminder of the star who was born in the original A Streetcar Named Desire, first mounted on Broadway in 1947. The plot doesn’t need rehashing; if you don’t already know about Marlon Brando’s tight T-shirt and the kindness of strangers, it’s too late for you to care.

The good news is that, in the resonant new production that kicks off this year’s Tennessee Williams Festival St. Louis, you won’t even think about Brando. Tim Ocel’s direction gives us a play that is both faithful to the original script and startlingly fresh. It doesn’t feel like one of those paint-by-numbers productions offering the highlight reel from a beloved movie version, thank God. This Streetcar feels positively insightful, even with all the years that have passed and the cultural touchstones that can’t help but clutter your perception of it.

Indeed, many classic plays, upon being remounted in 2018, require a bit of reworking. The swishy gay roommate no longer seems quite so funny; the once-charming battle of the sexes now embarrassingly misogynist.

Not so A Streetcar Named Desire. Watching the exceptionally well-acted production that made its premiere last night, I couldn’t help but think about how the #MeToo movement hasn’t rendered this play outdated — it’s only primed the audience for its impact. Williams’ two sisters, “pulled down from the columns” of their family’s once-grand Mississippi manor and reunited in a crowded two-room New Orleans flat with the younger sister’s brutish husband, find their desire leads them to abuse, condemnation, and, ultimately, rape.

Their choices aren’t easy, but the play succeeds because the playwright acknowledges that and never judges them for it. As a gay man observing the heterosexual pas de deux from the outside looking in, Williams saw women with astonishing clarity — our desire, and the judgment we face for having it; our weakness, and the choices it condemns us to. Even so, he gives us his full sympathy. It’s no wonder the play holds up so well even in a tense cultural moment. 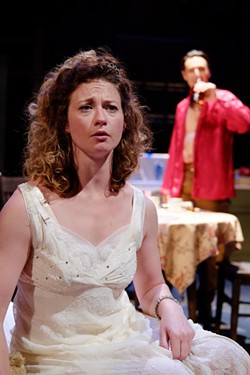 RIDE HAMILTON
Stanley (Nick Narcisi) does everything he can to hasten the downfall of his sister-in-law Blanche (Sophia Brown).

Credit for this goes, in part, to director Ocel and his talented cast, which includes an incandescent Lana Dvorak as Stella and a puppyish Spencer Sickmann, excellent as Mitch.

But at heart, what makes Streetcar so great is the script, and this production excels because Ocel is smart enough to be faithful to the text. He doesn’t try to put spin on a play that doesn’t need it. The set, by James Wolk, would have been right at home in 1948; the lighting, by Sean Savoie, is effective, but doesn’t show off. The words are what carries this play.

The words and, of course, Blanche. Brando’s sheer charisma may have unfairly tilted the original production to Stanley, but what has made every Streetcar since rise or fall is its leading lady, and in Sophia Brown, Ocel has a wonderful one. Brown has a deep, throaty voice that immediately makes you realize she’s not imitating Vivien Leigh — her Blanche is tougher, more grounded in her certainties. But when she falls, she falls even harder. It’s such a terrific performance that, by the end, you’ll have a hard time imagining Brown in any other role. She’s that convincing.

Anyone who’s seen Streetcar before — and is there anyone who hasn’t seen Streetcar before? — knows that it will end terribly for Blanche, that no oil-well millionaire will show up to waltz her off to Dallas, that Mitch isn’t going to marry her, that Stanley (a surprisingly effective Nick Narcisi) will destroy her, emotionally and then physically.

Knowing this doesn’t lessen the impact. Instead, it allows you to take in not just the rape that ultimately pushes Blanche over the edge but the violence that surrounds all the women in the play, and the way their friends, neighbors and sisters learn to accommodate it. Even our heroine laughs when the slatternly crone upstairs is the one taking a beating. She’s not of her class; her sympathies have their limits.

“I couldn’t believe her story and go on living with Stanley,” Stella says of her sister near the end, and it’s less an explanation than a terrible confession, perhaps the most soul-crushing moment in a play full of them. So many times, we choose not to believe a “story” because we can’t accept what the truth will require of us; we can’t summon the courage to leave or don’t want to give up the comforts that deception affords us. Williams understood all this back in 1947. In every perfect detail, this production reminds us of the clarity of his vision.

Sarah Fenske is the executive editor of Euclid Media Group, overseeing publications in eight cities. She is the former host of St. Louis on the Air and was previously editor-in-chief of the RFT and the LA Weekly. She lives in St. Louis.
More
Scroll to read more Arts Stories & Interviews articles (1)
Join the Riverfront Times Press Club

The Best Things To Do in St. Louis During the Weekend, October 6 to October 9