Comedian B-Phlat Returns to St. Louis — And No One Knows What's Coming

The St. Louis native who appeared on Comedy Central will perform at Central Stage on Thursday 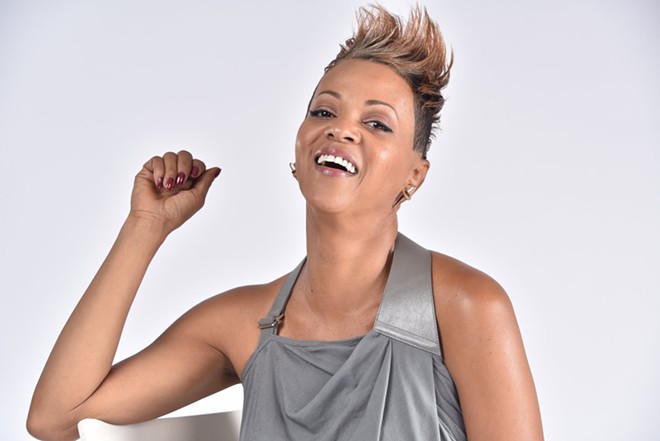 It’s a homecoming for Beverly Perkins. Well, it was supposed to be a homecoming two weeks ago, for a show on December 29, but then that whole Southwest debacle happened, and her flight got canceled, so she had to reschedule her show. “I ain’t messing with Southwest,” she says. “They can kiss my ass.”

But now it’s really a homecoming for Perkins. She’s back, fresh off a Delta flight with a layover in Atlanta. She touched down in the Lou ready to make people laugh and have some fun. Or as she succinctly says: “When I come to St. Louis, I come to smoke and get my drink on.” She’s going to see her family. She’s going to Bar Code and then Blueberry Hill for a birthday party.

“I love it,” she said by phone on Monday afternoon. “Oh, ohhh, I'll be up early — I got up extra early, at 2:30 [a.m.], just so I could text people and let them know I'm coming. So I already got it laid out — like tonight I'm going down to the Grove … My homies, they picking me up so we can go drink Guinness. I got something to do every night.”

She’s also going to give a comedy performance. On Thursday, Perkins, better known as comedian B-Phlat, will star in the Mid-Coast Comedy Series at Central Stage in Grand Center. The St. Louis native has a long list of accomplishments to her name, including appearances on HBO’s Def Comedy Jam, Showtime’s Comics Without Borders and Comedy Central, where her skit “This Is Not Happening” has been viewed over 2 million times.

When Perkins returns on Thursday, it will be her first performance in St. Louis since 2019. Performing in St. Louis is always a little stressful, she says. “I told my husband I only get a cold sore when I come to St. Louis.” Like, look at her phone, she says. She has 47 unread text messages, with people wondering what time the show starts, where it’s happening and, “Oh, can they get a ticket?”

But that’s all part of the fun.

She hasn’t lived full-time in St. Louis since the 1990s when she moved away to attend Drexel University in Philadelphia. Back then, she didn’t even have plans to become a comedian. She planned to earn her JD/MBA degrees and become an art museum curator.

“It was too stressful, and I dropped out and said, ‘Fuck it’ and became a comedian,” she says.

She has stayed in Philadelphia ever since.

But St. Louis still plays an integral role in Perkins’ art. Actually, one could argue that her art might not exist without St. Louis. Her work is filled with references to St. Louis.

Perkins grew up in St. Claire, a small rural town southwest of St. Louis. In seventh grade, she moved to St. Louis wearing a Harley Davidson jacket with a bald eagle on the back — only to be teased by her new classmates in St. Louis.

“I always felt like if people bullied you, you would step your game up,” she says. “So it made me step my game up. I wouldn't be like, ‘Oh, I don't want to go to school.’ No, I was going to school, show people I got my shit together.

“I quit wearing that Harley Davidson jacket, and now I'm like a fashion aficionado, and you can't tell me shit about no fashion,” she adds, dying of laughter.

Perkins would stay in the St. Louis area throughout the next few years. But she still didn’t think she would go into comedy. She graduated from Kirkwood High School and then Fontbonne University with a degree in art history and ceramics.

It wasn’t until 1997, though, that she decided she wanted to be a full-time comedian. She quit her job at a law firm and never took another 9-to-5 again. Actually far from it. Perkins usually wakes up every morning at 3:30 a.m. and before she even starts work, she gets in some yoga and creative writing.

Even though her job is to make people laugh, there’s nothing haphazard about her day. She has more than enough responsibilities as a full-time comedian and creator/ host of the podcast Tight’n Up Tuesdaz, where she goes to people’s houses and fixes, reorganizes and flips one of their rooms without buying anything new. “I'm working on like seven different projects all the time,” she says. She has over seven journals, for example, boxes full every single stand-up show and records of the outfits she has worn at each show.

“I'm funny, but I'm not fun,” she says. “That's what it is. I’m super serious about everything, like school — everything.”

But for all of the time that Perkins puts into her work, all of the meticulous planning to schedule her life, when she steps on the stage, there’s nothing planned. Perkins calls her humor “grown, unexpected, calm before the storm.

“You never know what I’m going to say.”

That’s because Perkins doesn’t know what she’s going to say either. No one wants to hear a script, she says. “I don’t like continuity when it comes to comedy,” she says. “It’s like listening to a broken record. Even though you might like that same song, you can listen to the same song over and over. You can’t listen to the same joke over and over. “

So when she steps on stage on Thursday, she’ll look at the crowd and see what comes out.