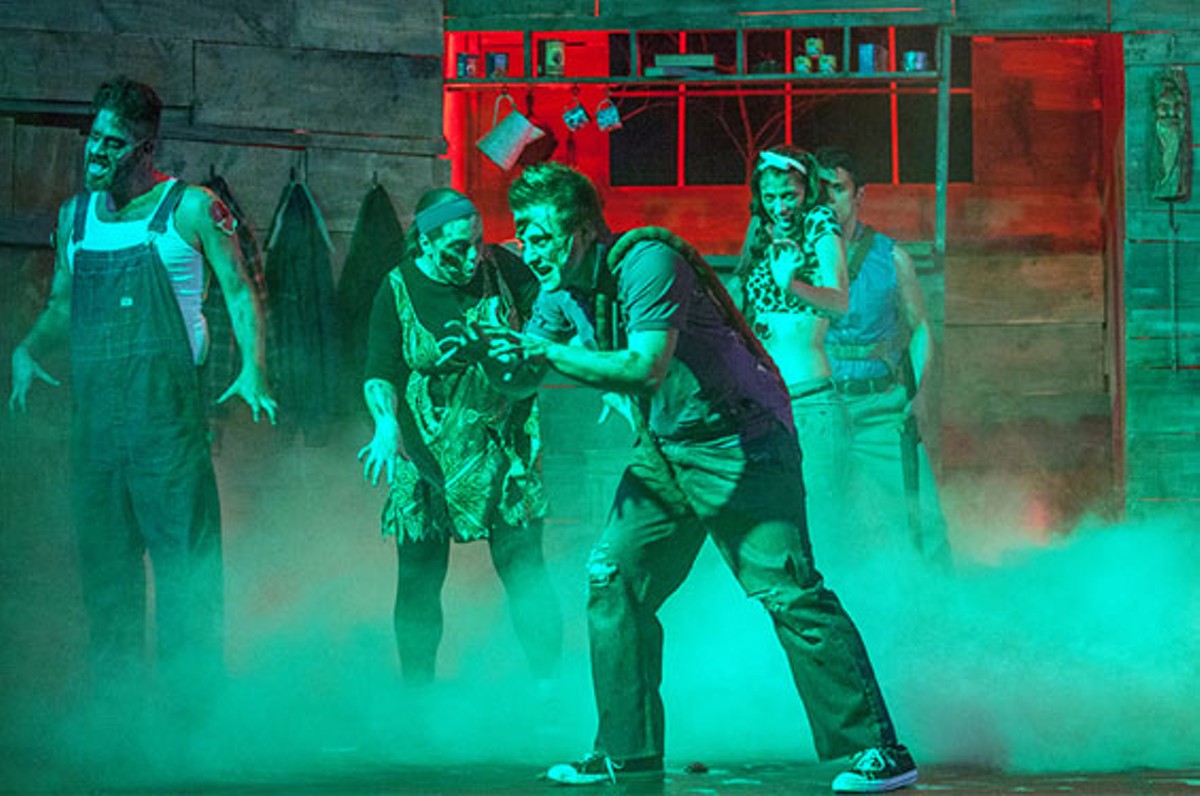 If you're familiar with Sam Raimi's epic series of Evil Dead films, you know that the one thing they lack is a sense of restraint. There's gore, there's horror, there's laughs, there's pop-culture references, there's satire, there's death — but there is no holding back. Oddly enough, Justin Been's staging of Evil Dead: The Musical shows a great deal of restraint, at least in the first act.

The plot is basic Horror 101. A quintet of collegiate troublemakers journey to a cabin in the woods for a week of expected debauchery only to discover the previous tenant awoke an ancient evil by dabbling in the occult. The group then unknowingly brings that evil into this world and must fight for their lives in this cabin of death.

Our hero is Ash (Paul Cereghino), tall and strong-jawed if a bit slow on the uptake. He's still smarter than his best friend, Scott (C.E. Fifer), a genuinely unlikable horndog bro; as for Scott's date, Shelly (Angela Bubash), the cabin's knotty pine walls are smarter than she. Ash's girlfriend is Linda (Eileen Engel), an earnest good girl who is willing to go bad for Ash. Tagging along is Ash's sister Cheryl (Anna Skidis), a charming dingbat who loves books and party games.

Cereghino and Fifer are a bit stiff in the early going, as if they're taking the whole thing a little too seriously. The ladies, however, are all more comfortable embracing the silliness of the dialogue and the setup; the contrast is obvious when Engel and Cereghino sing the very pretty and wholly ridiculous power ballad "Housewares Employee." Engel mimes flying to her love as a bird, leaping and flapping her arms with abandon, demonstrating fantastic breath control as she does it. Cereghino sort of shuffle-hops to her. And Skidis, once transformed into a demon, becomes a maliciously punning jack-in-the-box, popping up out of the basement to insult everyone in sight; she also has an insane cackle that never falters.

Fortunately, Cereghino throws himself into it once he has to fight his right hand and cut it off with a chainsaw. The dams break, and the blood floods the stage as he laughs wildly over the ratcheting of the chainsaw. He and Engel also pull off a nifty bit of stage magic when Ash decapitates Linda.

While Act One is slow to start, the second act begins with a fountain of blood and never looks back. The arrival of new romantic interest Annie (Brittany Kohl) and gigantic backwoods bumpkin Jake (Zachary Stefaniak) gives the show new legs, as both actors play their parts with unfettered zest. If you pay for seats in the Splatter Zone, this act gives you your money's worth. Stefaniak's death song, "Ode to an Accidental Stabbing," is awash in gore, as are the first two rows. In a performance last week Ash shot a demon at deep stage left and the blood doused the face of a man seated at stage right.

It's always good to end a show on a high note.