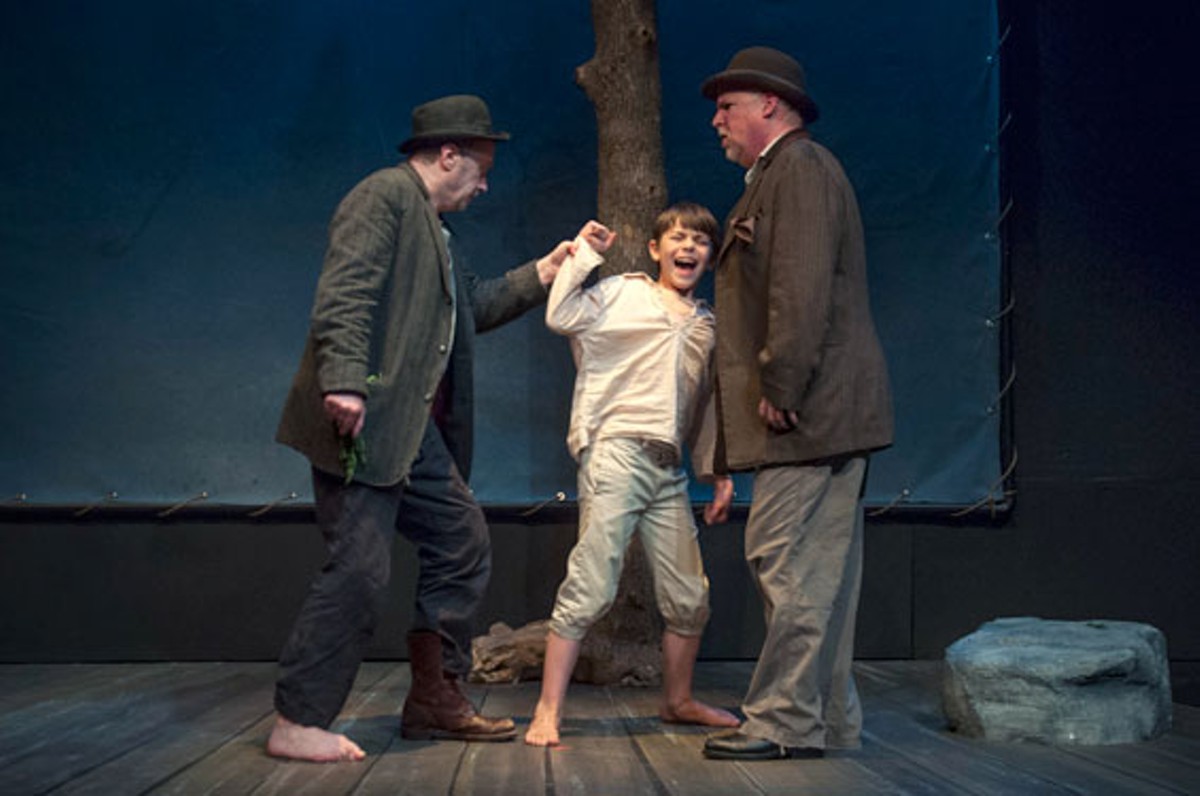 This past Friday, out in the real world, in Boston and across America, anxious citizens waited through the day and into the evening for news of the capture of the second suspected marathon bomber. But inside the Gaslight Theater, under a barren tree on a parched country road, far removed from the attention of SWAT teams and looming helicopters, two baggy-pantsed clowns played out an even more interminable waiting game than the one in Watertown. Ever since Samuel Beckett's absurdist tragicomedy debuted 60 years ago, Vladimir and Estragon (Didi and Gogo to their intimates) have been Waiting for Godot, an unseen figure whose very existence must be taken on faith, for, unlike the object of the Massachusetts dragnet, Mr. Godot will never be found.

Forget Seinfeld. Waiting for Godot is the great-granddaddy of all shows about nothing. Our two protagonists do little more than talk of suicide and erections. Vladimir sings songs and Estragon eats carrots (no turnips, please). Yet at the end of two-plus hours, we have glimpsed innocence and evil, kindness and suffering, love and intolerance. The evening is rife with metaphor. Perhaps Didi's bouncing ball stands in for the ever-spinning globe. The arrival of the ironically named Lucky (the valiant Aaron Orion Baker) with a noose around his neck personifies mankind at the end of his rope.

Despite Godot's timeless aura, surely the play hovers in the long shadows of World War II. "Was I sleeping, while the others suffered?" Vladimir asks in tortured agony. "Will night never come?" Parsed line by line, most of the dialogue seems clear enough. It's when these speeches are strung together that the text morphs into ambiguity. Untold words have been written about Godot's hidden meanings, though perhaps none with more candid clarity than those penned by New York Times reviewer Brooks Atkinson. In evaluating the first Broadway production in 1956, in a kind of concession Atkinson described the piece as "a mystery wrapped in an enigma." There is little to be gained by trying to analyze the script cerebrally. Better to experience the evening viscerally. Allow your mind to free-associate as you would while listening to a string quartet.

This is where the current St. Louis Actors' Studio staging excels. Director Bobby Miller has shaped the piece so that it flows like a musical composition, full of contrapuntal rhythms and crescendos. Actors' Studio has assembled a dream cast: Terry Meddows as the hapless Estragon and Gary Wayne Barker as the more introspective Vladimir. Meddows is an inspired comic in the stone-faced manner of Buster Keaton. When his eyes and mouth drain of life, Meddows' Gogo might be the subject of one of Dorothy Lange's Depression-era photos. The consummate Barker provides a cherry-faced bum's-eye view of faded elegance. At times, when Barker and Meddows wrap themselves together, their joined faces could pass for the masks of comedy and tragedy.

Miller elicits a compelling performance from Greg Johnston as the gruff Pozzo, who boasts, "Do I look like a man who can be made to suffer?" before succumbing to the greatest fall of anyone in this desolate netherworld. In stark contrast to the blustery scenes with the all-knowing Pozzo, the exchanges between Vladimir and the boy (Hayden Benbenek, lovely) who serves as Godot's emissary are sweet and touching. "Did you not hear what the child said?" Vladimir chastises the inattentive Estragon, as if echoing the prophecy in Isaiah that "a little child shall lead them."

Waiting for Godot is not for everyone and never has been. "This thing is putting me to sleep," the woman in the row in front of me complained to her friends during intermission on opening night. To each his own. But at the end of a tumultuous week defined by episodes of disorder and havoc from Massachusetts to Texas, Beckett's tale of two companions searching for answers that never come seemed to me to be ennobling, immediate and true. I have never seen this inexplicable play more movingly rendered than in the current staging at Actors' Studio.