Muny patrons, ya'll should not run out to your cars during curtain call 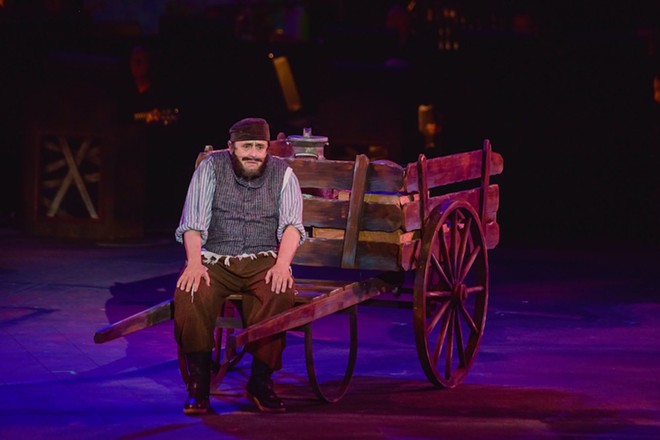 VIA THE MUNY
At the 2016 Fiddler on the Roof patrons ran out during the show's curtain call while the show's lyricist, Sheldon Harnick, was in the audience.

Imagine you have just taken your seat at the magnificent St. Louis Municipal Opera Theatre. Surrounding you is a packed house of 11,000 fellow Munygoers, a crowd equal to roughly half the population of Webster Groves, who all fall silent as the show begins.

In the hours that follow, you are treated to heroic doses of Muny Magic™. You marvel at the massive dance sequences featuring dozens of triple-threat performers. Towering voices imported directly from Broadway leave you in awe, as do the dazzling sets assembled and operated by an expert and unseen crew, all while a peerless orchestra provides sumptuous musical scenery that drifts up and away into the starry night sky.

As the final note rings out, and the stage lights dim to darkness, you suddenly find yourself confronted with a choice: Do you stay at your seat and applaud with unbridled enthusiasm for the miracle you have just witnessed, or do you scurry back to your car like some kind of asshole?

Although the vast majority of Muny patrons select the former option, a disconcertingly large number of people choose the Rat’s Path. These finks can be found slinking out during curtain call, with their shoulders hunched in vain efforts to conceal their escape, their gaits increased to atypical speeds driven by the adrenaline of shame.

The worst case of premature evacuation I had the displeasure to witness occurred during the 2016 production of Fiddler on the Roof. Present in the audience was none other than the show’s lyricist Sheldon Harnick, who flew in to see this inventive production that included an onstage orchestra as well as a song that had previously only been heard in the movie version.

I sat in the section behind Harnick and intermittently observed him from afar until the sun set. What a privilege it was to watch that man experience his sacred creation in a totally new way more than 50 years after its premiere. No matter how many times he has seen that show over the decades, it must be an immense thrill to hear thousands upon thousands of people applaud every number, to receive unqualified assurance that he made something that shall forever retain the power to move human hearts.

Then after the curtain, the deluge. Tevye and the titular fiddler had scarcely scampered offstage before a bunch of lunkheads started hauling their sorry carcasses through the aisles. As Harnick applauded the actors taking their bows, a procession of rich pricks ditched their seats up front and headed for the exit, obscuring the maestro’s view and making St. Louis theatergoers look like a pack of rubes.

Indeed, this type of curtain call exodus is not exclusive to the Muny: the same dolts can be seen fleeing the Fox, running from the Rep, and scrambling out of Stifel on any given evening. It is not worth anyone’s time to ruminate on the motivations of boors who clear out instead of clap, other than that they are contemptible little piggies pathetically oinking their way to the front of the herd so they can be the first hogs on the highway home to their miserable suburban styes.

There are innumerable reasons why one should avoid falling in with such swine, but I shall henceforth focus on three central points, two practical and one more existential. The first reason you should remain at your seat and applaud is because those are the rules. At the front of every Muny program is a section titled “Theatre Etiquette,” which concludes with a humble appeal to “please show your gratitude by remaining at your seat until after the curtain call.”

Then to really drive the point home, the great Ken Page intones the same request over the mighty Muny speakers at the top of every show just before asking the audience to rise for the national anthem. If you won’t listen to a mouthy jerk like me, at least heed the words of a figure of such soaring eminence as Page, Old Deuteronomy himself and MVP of The Nightmare Before Christmas. (Sorry folks, gotta stay and clap. Oogie Boogie told ya.)

Another reason why you should follow the theater's directives is because you will not get home early. Muny shows start at 8:15 and can go on past 11. Ducking out like a coward before the rest of the crowd will not turn back the clock. You will be late for bedtime on Muny night, my friend, and that is that.

Still, I’ve gotten stuck in Forest Park traffic after the Muny and it’s no fun at all, but thankfully over the years my family has developed a foolproof way to steer clear of such frustrating gridlock: pack a cooler and hang out by the car. Doesn’t that sound nice? Sipping on an ice cold Busch beer or a fizzy San Pellegrino, chatting with pals about your favorite parts of the production? Not only will this pass the time while you avoid the initial rush of outgoing cars, but sharing your impressions of the show has the potential to bring you closer to your family and friends, thus fulfilling the ultimate promise of this whole glorious enterprise.

Which brings me to my last point: Don’t take the Muny for granted. There is simply no other place on Earth where a colossal crowd of 11,000 people can gather together to watch top-tier musical theater, not to mention seven productions in quick succession over the span of a summer. The largest Broadway theater holds just under 2,000 people and admits no one for free outside of occasional ticket lotteries and corporate patronage. The Muny, of course, leads the theater world in artistic egalitarianism by offering 1,456 free seats for every show.

Scream it from the rooftops and chant it to the heavens: 1,456 free seats! That’s been the best deal going for more than one hundred years, a span of time that can reduce even the most radical action into routine. It can be easy to see the Muny as just another summer destination among many, a place where people sing silly songs and dance funny dances in the stifling heat.

The Muny is much more than that, though, not only because those performers onstage and in the orchestra pit are some of the most talented folks alive, but also because uniting more than 10,000 people to watch theater outdoors is an act of spiritual fellowship that goes back to the ancient Greeks. You become part of the performance simply by being present at it, and when you are flanked by scores of cheering theatergoers enraptured by every word being uttered and sung onstage, your power is manifold.

So next time you go to the Muny, stay put and clap for the nice people. They deserve it, and so do you.