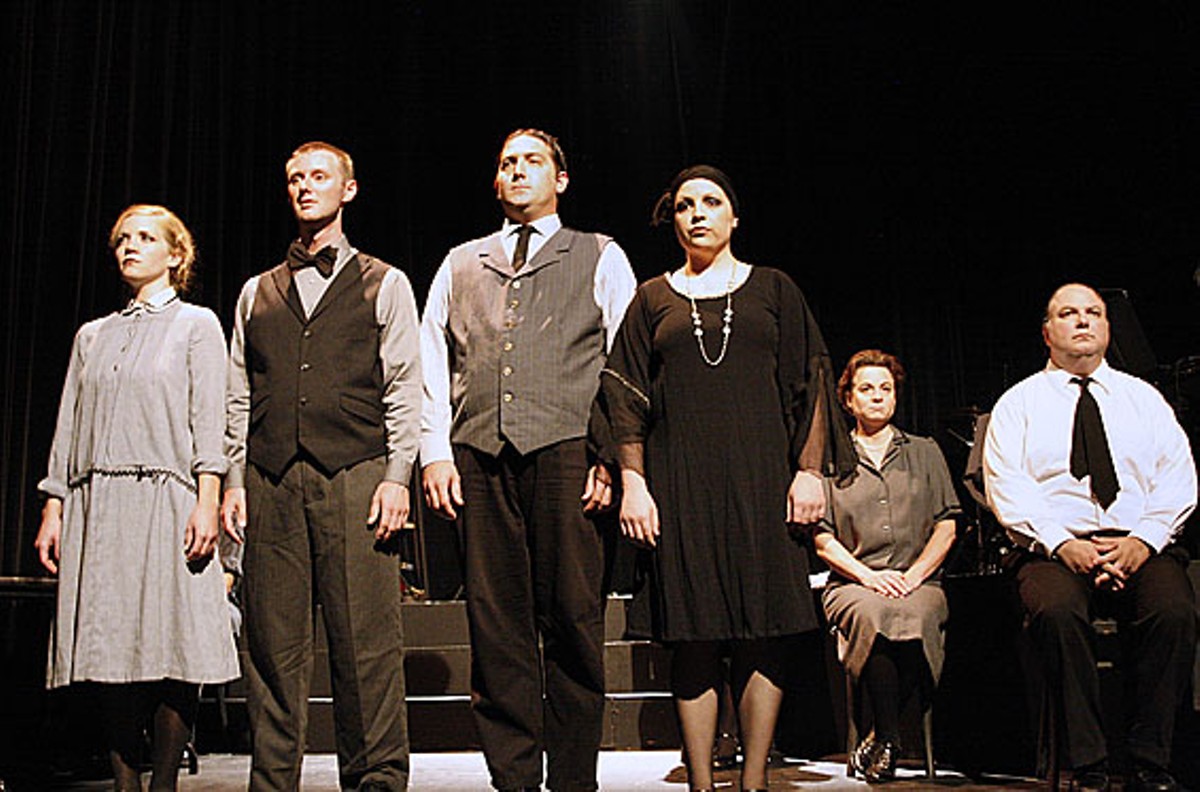 The Cast of The Adding Machine. Autumn Rinaldi

The R-S Theatrics/Soundstage Productions presentation of Adding Machine: A Musical opens with a numbing scene of marital blah, as Mr. and Mrs. Zero (Chuck Brinkley and Kimberly D. Sansone) settle into bed for the night. Not to sleep, mind you; Mrs. Zero has to first relate the quotidian details of every go-nowhere conversation she had with her friends, and she does so in a braying, grating warble that drills into your sinuses. Brinkley's only responses to this barrage of noisy nonsense are eye rolls, quiet sighs and stifled resentment.

It is a nightmare, this song, but so is Mr. Zero's life. Tonight — and, you quickly surmise, as he has through all the years of marriage — he buries his head and endures stolidly. But Mrs. Zero can't endure that, and she berates him for his nothingness and tells him she would have left him if she had the nerve.

That's the recurring theme of Joshua Schmidt and Jason Loewith's musical (based on the 1923 play The Adding Machine, by Elmer Rice); if any of these characters had the nerve to change, their lives would have been better. Instead they remain just where they are, and so they suffer, and they make one another suffer. At times you'll suffer too. Christina Rios' direction feels flat and prosaic for stretches of the first act, and the show plods along through a series of nondescript tunes that suffer from a maddening sameness. But then an actor steps into a song and hoists this bleak show into the stratosphere.

Brinkley's Zero is a bulky failure, a man who has spent 25 years totaling sums in his head for a shop, holding on to the belief that he'll get a promotion once he has served his time. Instead he is fired by his smooth-talking boss (Reginald Pierre) on his silver anniversary and replaced by a newfangled adding machine. For the first time in his life, Zero cannot endure. He kills the boss and then heads home, same as always, to drag down another one of his wife's social gatherings.

Brinkley's performance is a marvel of restrained energy management. Visually, he is the lumpen prole, and his singing voice isn't what you'd expect in a musical lead. But his undistinguished voice suits Zero, a man being left behind by the Industrial Age. When he catalogs his gripes about the job in song at the post-murder dinner party, he gradually opens the floodgates on his long-throttled feelings, and his voice rings like a fanfare for the common man. Of course, there's a heap of bilious hate, racism and anti-Semitism in there too. But he clamps it off so suddenly, you can't quite believe it ever happened. Men like Zero are not to be seen or heard.

Following his execution for the murder, Zero discovers the afterlife isn't a great fit, either, even though Daisy (a delightful Maggie Murphy), a coworker he pined for, has followed him into the Great Beyond and the Mrs. hasn't. Once again it's a problem of nerve — or lack thereof — and faced with no job and an idyllic Heaven, Zero's nerveless nature compels him to revert to type. 

It's a downbeat show that offers no happy endings, but only because its protagonist is unfamiliar with the concept.