The Forgotten History of Racism at the 1904 World's Fair in St. Louis 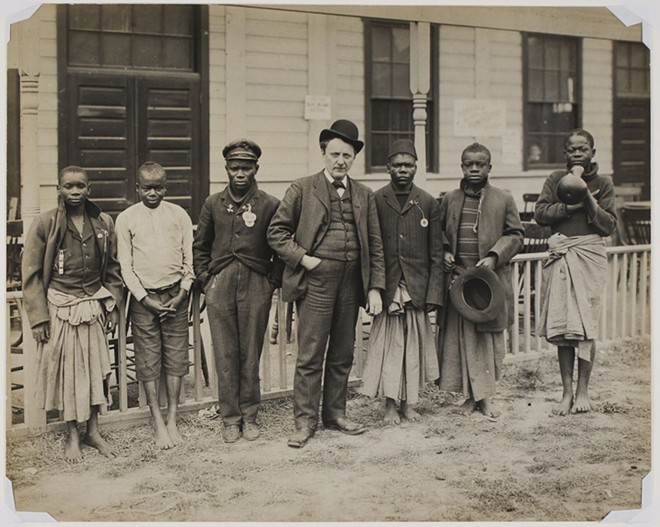 LIBRARY OF CONGRESS
Samuel Phillips Verner (center) with random Africans he bought at the behest of Louisiana Purchase Exposition and passed off as "pygmies" at World's Fair.

The 1904 World's Fair was St. Louis' first moment in the international spotlight, and the city, the fourth-largest in the nation at the time, wanted to put on its best face for the world. A small city was built in and around Forest Park to house display halls, music halls, restaurants, amusement parlors — just about everything you could imagine.

Including, in a special hollow, a group of pygmies from Africa. They were displayed in all their "savageness," with a walkway over the top so white visitors could literally look down on their fellow human beings and point and laugh.

As historian Angela da Silva explains, this was a far different sort of display than America brought to the 1898 World's Fair in Paris.

"There was a special exhibit called 'The Progress of the American Negro' at the Paris 1898 World's Fair, curated by W.E.B. Du Bois," da Silva says. "One of the reasons Du Bois did it was to show that there wasn't a monolithic black culture in America. A black man at Smithsonian was charged with finding books by black people for the exhibit. Du Bois was hoping for 200 — he found 3,000. Four years later, black people couldn't get a drink of water on the fairgrounds in St. Louis."

Da Silva's recent research reveals that, while the 1904 World's Fair welcomed the international community to St. Louis, the invitation didn't extend to black St. Louis — unless they wanted to work a menial job behind the scenes or be in one of the anthropological displays designed to "prove" their subhuman nature. It's this research that informs "The Unfair Fair: Prejudice on the Pike," held at the Mary Meachum Freedom Crossing (28 East Grand Avenue; www.marymeachum.org) on Saturday, May 5.

"We'll have an hour-long play with vignettes that show, authentically and honestly, what happened at the World's Fair," da Silva says. "Some people are going to be upset — it's overt racism. Ugly things are shown. But the truth needs to be known."

Da Silva spent her vacation in the Library of Congress searching for documents and photographs related to the fair. There she found photos of the Anthropology Village that housed the pygmies.

"Some anthropologists believed the pygmies were the missing link between man and monkey," da Silva explains. "I found official portraits that were taken of some of the pygmies, and they're labeled 'Missing Link No. 1, Missing Link No. 2.'" She's had them blown up to life-size so the people can be seen clearly for who they were — human beings. 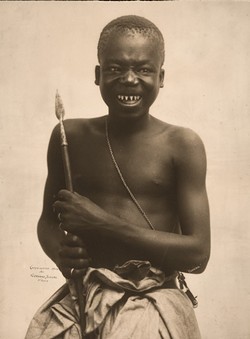 LIBRARY OF CONGRESS
Ota Benga, one of the men displayed as a pygmy. After a year in St. Louis, he was consigned to a cage the Bronx Zoo.

Officially, the fair did not sanction discrimination. But as da Silva found, it didn't need to be sanctioned by organizers; plenty of volunteers and businesses were happy to discriminate on their own recognizance, refusing to serve black patrons food, souvenirs, even water.

"The National Association of Colored Women was holding their conference here July 13," da Silva recalls. "One of the women scouted around on site ahead of the conference and found out she couldn't get served anywhere; 2,000 women said 'hell, no. We won't go,' and they pulled out of St. Louis."

One of the most surprising tidbits da Silva learned in her research was about the Boer War, which was fought between the United Kingdom and descendants of Dutch settlers in South Africa at the end of the eighteenth century — and then was briefly reprised here. "The fair re-fought the Boer War everyday for the crowds," da Silva says through laughter. "The British contingent brought a group of Zulus over from Africa to tend the animals, just like they did during the war. Black St. Louisans would go see them, these tall Zulus. They started talking to each other and the local blacks would tell them, 'You're in America, now. You can leave, you know.' At the end of the Fair, most of the Zulus donned Western clothes and walked out the front gate and blended in."

These are the sorts of forgotten (it's a kinder word than "suppressed") stories that da Silva loves to share. After sixteen years of planning and performing at the Mary Meachum site, she's found that modern St. Louis is eager to learn the truth about its past, warts and all.

"I'm trying to talk about the moments in black history that aren't spoken about," da Silva says of her life's work. "Every year we do this, the crowd is larger. We get a lot of repeat people and there's a lot of kids. Those kids are engrossed. We often wonder if they're taking it all in, how much are they getting? But they keep coming and keep watching."